4 Part Blog Series: The Spooky Side of Social Media. #1 – We Really Do Know What You Did Last Summer 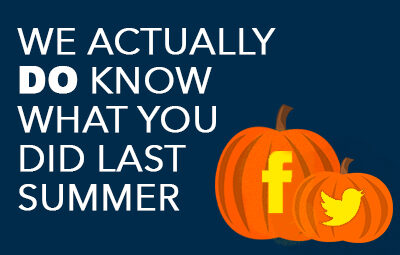 Over time, with the exponential growth of social media, not being on at least one or two social networking sites has become outside the norm. More and more people of all ages are joining to stay up to date on the lives of old friends and distant family members. The problem is, while most social media activity is innocent, it’s easy to cause serious damage to your reputation if you’re not careful. Whether you are posting something that causes a stir or someone posts something negative involving you, it never goes away.

These days, it’s not unusual to start curating your digital footprint at the tender age of 10. More than 60 percent of 13-to-17-year-olds have at least one profile on a social networking site, many spending more than two hours a day there (Social Networking, 2017).  It is not uncommon for a young child to be highly active across three or four social media sites.

Exploring social media at such a young age means that by the time college graduation comes around and job searching begins, an individual’s digital footprint has been developing for years, and is in many cases already well established. But children and young teenagers are not thinking about how their social media activity today might affect their reputations tomorrow.

From the moment you start posting on social networking sites, you have a digital footprint, and that activity never goes away. Think about how much positivity and negativity you’ve expressed, how many different posts you have liked, and how many videos and photos you have posted. Any tech-savvy person can easily find out what you did yesterday, last week, last month—or even four years ago.

Recently, a woman from Paris asked the popular dating app Tinder to grant her access to all the personal data they had on record for her. She did not expect the overwhelming amount of personal information Tinder had collected on her during her four years of activity on the app. “Some 800 pages came back containing information such as my Facebook “likes,” my photos from Instagram (even after I deleted the associated account), my education, the age-range of men I was interested in, how many times I connected, when and where every online conversation with every single one of my matches happened…the list goes on.” (Duportail, 2017).

This is just one example of the time capsule that is the internet, and demonstrates how using social networking sites can have an impact on your future plans. According to Career Builder, 28% of employers’ report that they have fired people for non-work related online activity, and 18% have let people go because of something they posted on social media (Abrams & Spritzer, 2016). When 20-somethings start applying for jobs and going through background checks, social media posts dating back to their middle school years can be reviewed.

Checking the social media footprint of prospective employees has become a staple in the hiring process. Our resumes are perpetually available online in various forms, some of which we control and some of which we don’t (Fertik, 2012). Stumbling upon negative information related to you in any way can significantly jeopardize your chances of getting hired in the future.

Going through the process of googling yourself to discover what information is out there has become a best practice for job seekers. Already, recruiters and hiring managers are relying heavily on the internet to research candidates for employment. More than 75 percent of employers actively research candidates online. Most importantly, studies also show that more than 70 percent of employers have decided NOT to hire a candidate based on what they’ve found on social media (Fertik, 2012).

Virtually anyone can find out about you and what you have been doing on the World Wide Web. So what skeletons do you have hiding in your closet?

Duportail, Judith. (2017). I asked Tinder for my date. It sent me 800 pages of my deepest, darkest secrets. The Guardian.

Fertik, Michael. (2012). Your Future Employer Is Watching You Online. You Should Be, Too. Harvard Business Review.