4 Part Blog Series: The Spooky Side of Social Media. #2 – Do You Really Know Who Your Friends Are? 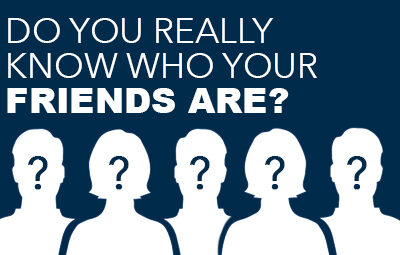 These days, a majority of teens and young adults don’t consider meeting strangers online and developing personal relationships with them to be taboo. Many of them spend so much of their time exploring social media sites, they consider some of their best friends to be people they have met online. Six in 10 teens say they have met at least one new friend on the internet (Kang, 2015). Teens are increasingly valuing their cyber connections more than their in-person friends.

The intensity of online interactions can create unique pressures on adults and parents to not only understand the importance of these connections in teenagers’ lives, but also to continue to protect them from the hidden dangers of the internet. “Like it or not, this is where our teens talk, plot, laugh, and fight with some of the most important people in their lives,” said Amanda Lenhart, author of the Pew Research Report “Teens Technology & Friendships” (Kang, 2015). Unfortunately, what they often do not understand is that many of their online “friends” are not who they say they are.

Young people need to continually educate themselves on the dangers inherent in intimate cyber relationships. These connections create a significant amount of vulnerability and leave teens open to predators. Nearly nine in 10 teenagers have said they’ve witnessed people over-sharing information about themselves on social media (Kang 2015). Many of them think they are doing everything right to protect themselves, but they forget how much personal information they share over time.

The problem is that many young people are naive about the dangers of online interactions, and have difficulty imagining bad things happening to them personally. According to a study from the Crimes Against Children Research Center, one in five children have been solicited online, but  75 percent of the teenagers reportedly said they were not afraid or concerned (Rosin, 2014).

Many of us know about “catfishing,” which can be defined as someone pretending to be someone else on the internet—particularly on social media—to create false identities and instigate deceptive relationships. In 2015, a YouTube star teamed up with the parents of teenage girls to do a social experiment: the star pretended to be a teenage boy, friending the young girls online and then arranging to meet them in real life…only for the girls to learn that he was not who he said he was.

The video went viral, with more than 33 million views on YouTube (Wallace, 2015). And while it sparked significant controversy, many saw it as one of the only ways to educate internet-obsessed teenagers on the dangers they face. Some felt that the video initiated important conversations about online safety, while others argued that the conversation needs to be about solutions or ways of prevention. “Technology is not the problem. The problem is our misuse or lack of education behind it,” said David Polgar, a digital lifestyle expert (Wallace, 2015).

So ask yourself the question: do you really know who your friends are? Take the steps to educate yourself and those around you about the scary events that can happen inside the unpredictable cyber world, and remember, things are not always what they seem.

Kang, Cecilia. (2015). Third of all teens who meet strangers online are meeting them in person, too. The Washington Post.