4 Part Blog Series: The Spooky Side of Social Media. #4 – Trolls. 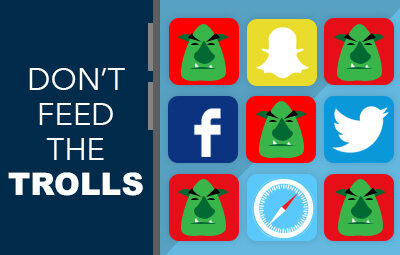 Have you noticed the evolution of the “tone” of discourse on the internet? It once seemed relatively positive; it’s now becoming more and more negative. “Don’t feed the trolls” is excellent advice, particularly in higher-ed social, where negativity can impact the overall success of the institutional accounts.

Spending 40 hours a week —if not more—perusing nasty, aggressive, or disrespectful comments, you see negative discourse develop by the minute and you acquire a firm understanding of how cynical social media has become. According to a YouGov survey, 28 percent of Americans admit to participating in “malicious online activity” and 23 percent have “maliciously argued over an opinion” with a stranger online—and that’s only those who admitted to it (Kleinman, 2014). Thinking about how many people are spreading hate and how often, it comes as no surprise that internet trolling continues to rise, as users think what they say can’t be traced back to them or that their comments are inconsequential because they are not said aloud. Our self-censoring mechanism has become optional, accountability is limited, and empathy is almost nonexistent.

Internet anonymity allows users to have zero accountability for inappropriate actions and comments. A total of 77 percent of Americans believe that having the ability to be anonymous is the highest contributing factor to trolling (Cueto, 2014). We use the internet as a personal diary, capturing and revealing the most intimate details of our lives. Unfortunately, this means more vicious commenting, which results in more rage-induced behavior, which in turn produces more and more internet monsters. And commenters are usually so distant from the targets of their anger they feel no remorse.

The internet was supposed to be a place for free expression, where users could speak their minds and share their opinions with their fellow internet users. The problem is that a lot of people who do so are attacked, making many users feel unwelcome and unsafe online. According to the Pew Research Center, 41 percent of American adults have been harassed online and 66 percent have witnessed harassment—up 35 percent since 2014 (Rainie, 2017). With the plethora of controversial topics being tossed around these days, it is difficult to avoid becoming  involved in heated threads.

So what can we do to suppress the trolling and make social a more stimulating space to explore? A space where topical, intelligent, and interesting conversation can take place again,   especially in higher-ed?

Recently, Refinery29 started a campaign called “Reclaim Your Domain” to make the internet (and the world outside it) a safer place for everyone. But such an initiative requires something from us. We all have a part to play in ensuring a safer and friendlier online space, so we can benefit from our interactions with others and make our online lives richer.

Outnumbering the trolls and participating in social to make the climate more positive not only makes the internet a more enjoyable place to communicate, it makes it a more valuable space to represent your college or university.