Activism & Racial Education: A discussion of ‘Between the World and Me’ 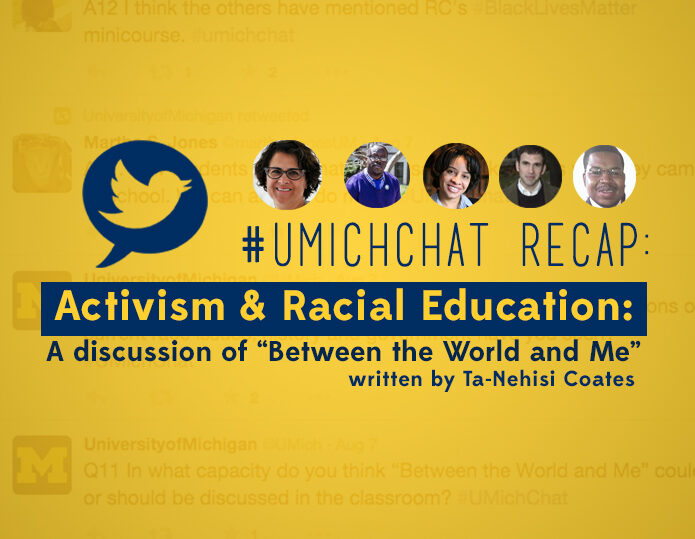 The objective behind #UMichChat is to stimulate meaningful dialogues around pertinent issues and highlight the expertise within the University of Michigan community. By combining our own social presence with those of our panelists, we hope to be able to significantly extend the impact of the conversation beyond the university, using social media to start and maintain far-reaching, purposeful conversations.

Last month, a group of U-M faculty reached out to UMSocial on Twitter and expressed interest in hosting a discussion surrounding the book Between the World and Me by journalist and blogger Ta-Nehisi Coates. This book has received attention and praise in the media recently -Toni Morrison hailed the book as ‘required reading.’-  because of the way it addresses race, physical wellbeing, struggle, and hope  Told as a series of letters from the author to his teenage son, Between the World and Me explores the realities of being black in the America of 2015. Themes include the long history of violence against black Americans, conflicts with police, and Coates’ personal feelings against the culture of optimism and uplift that traditionally exists in black, Christian communities.

Nearly a year ago, we hosted a chat on “Ferguson, Journalism, and Social Media.” The anniversary of  the Michael Brown shooting seemed to us to be the appropriate time to once again delve in to the nexus of scholarship, race, and activism. We were lucky enough to host five expert panelists from the U-M community: Martha Jones, professor of history, Afro-American and African studies, and law; Angela Dillard, LSA associate dean of undergraduate education; Robert Mickey, associate professor of political science; Hakeem Jefferson, PhD candidate in political science; and Austin McCoy, PhD candidate in history.

Our team provided the panelists with pre-scripted questions that provided structure for the conversation. The questions revolved around several broad themes, including: how Coates’ book fits into and illuminates the #blacklivesmatter movement, and how instructors can incorporate the book and its themes into the classroom. We also looked at Coates himself, and how he is situated among other prominent authors writing about black America.

We greatly valued the insights and expertise of our panelists as they shared their ideas and opinions on one of the most important issues facing our country:

You can see a full recap of the chat on Storify

The impact of this chat was remarkable: the hashtag #UMichChat generated a total of 5,715, 802 impressions with a total social reach of nearly 700,000 people in the days leading up to the chat. During the hour itself, #UMichChat was the top trend for the Detroit area.

Many other community members joined the conversation (including a retired Residential College lecturer who opened a Twitter account explicitly to participate in this chat and was very complimentary after it concluded.) This is a clear indication that we met our goals of community engagement and extensive reach.

We would like to thank our panelists for their time and their insight. Next month, we’re honored to be hosting two chat events on September 11– the first an exclusive conversation with President Schlissel about the upcoming school year; and the second, a “back to school” panel focusing on academic advising, housing/dining, and student life resources for new students. Be sure to #StaySocial and join in next month!