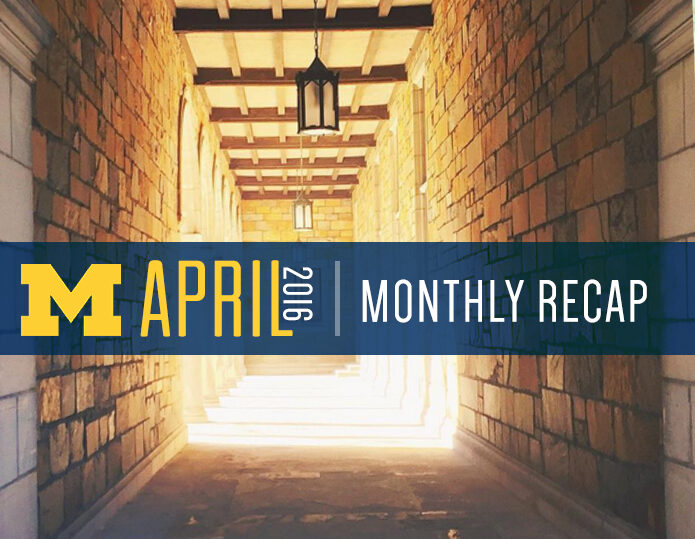 Tempus fugit! It seems like only yesterday we were welcoming Wolverines hoMe to campus for the 2015–2016 school year, and now it’s almost May. There were so many incredible moments during this semester, and we’re sad to see it come to a close. However, the end of the academic term doesn’t mean a shortage of activity on campus, so we continued to bring our audience a plethora of engaging, compelling Michigan stories. It’s once again time to reflect on the successes of this past month. Follow along to discover some of highlights from the past month.

Each year, the U-M student organization MUSIC Matters produces SpringFest, a daylong celebration of music, art, innovation, sustainability, and service. SpringFest attracted thousands of students with performance art, gourmet food trucks, a showcase of local startups, and free musical performances (this year courtesy of artists SonReal and Luke Christopher). The popular hip-hop group Migos capped off the day, with a sold-out performance at Hill Auditorium. We worked with MUSIC matters to publicize the event and emphasize its goal of bringing the community together. By re-posting video coverage of last year’s event, as well as releasing the promotional video “Why does Music Matter?”, we were able to reach more than 45,000 people and draw significant attention to the event.

April is Sexual Assault Awareness Month, and we recognized this by using our monthly #UMichChat to open a conversation about sexual assault, mental health, and general student well-being. Sexual assault is a highly charged issue on many college campuses, and we know that our audience wants to see these topics addressed in an honest, transparent manner. We brought together a panel of top-level representatives from various campus departments to discuss: SAPAC (Sexual Assault Prevention and Awareness Center) director Holly Rider-Milkovich; Dr.. John Greden, founder and executive director of the U-M Depression Center; Todd Sevig, director of Counseling and Psychological Services; Cooper Charlton, former CSG president and co-founder of the Wolverine Support Network; and Dr Robert Winfield, executive director of University Health Service. The result was a candid dialogue that addressed issues around stigma, the availability of resources, and ways for students to seek help. Plans for the future were also discussed. The chat had an impressive impact, generating more than 4 million impressions, and was trending regionally despite competing topical hashtags such as #OpeningDayDET and #NationalBeerDay; the chat also received coverage in the Michigan Daily. Community members joined the conversation, including one alumna who bravely shared her experience with sexual assault and how SAPAC was able to offer her support.

We also utilized Twitter to cover several special lectures and events that occurred on campus, such as a talk by the creators of Buzzfeed’s popular podcast Another Round. We live-streamed the event on our Youtube channel to allow all of our audience members to access the talk’s entertaining and thought-provoking content.

We were delighted to reach 100,000 followers on Instagram this month, effectively doubling our audience since April 2016. We saw our channel flourish with content that promoted both departmental initiatives and seasonal posts that reflected student sentiment about spring, finals, and graduation.

Following the success of last year’s #MyUMCap Instagram campaign, we once again collaborated with the Office of University Development to encourage U-M graduates to submit their customized graduation cap designs with a chance to win premium seats to the Spring Commencement ceremony. Over the course of the month, we received more than 100 submissions! We were blown away by the creativity and artistic talent the #Victors2016 possess, and choosing a winner was certainly not easy. In the end, we chose to feature this beautiful tribute to Ann Arbor.

Finally, we collaborated with SAPAC to produce a five-day photo series promoting the many free, confidential resources U-M offers for survivors of sexual assault. The campaign also highlighted U-M’s new Policy and Procedures on Student Sexual and Gender-based Misconduct and Other Forms of Interpersonal Violence, placing a link to the electronic version of the policy in our Instagram bio during the week of the campaign. Because sexual misconduct is such a highly controversial and sensitive issue, we had to carefully synthesize talking points with messages of hope, support, and understanding. The campaign proved to be highly effective, with images receiving many heartfelt comments

The UMSocial team was busy on Snapchat this month, creating at least one story nearly every day. Besides utilizing the platform for covering noteworthy events such as SpringFest, MRelay, and the FestiFools parade, we also used Snapchat to spread awareness about top-down institutional initiatives. We once again collaborated with SAPAC to create a story observing Sexual Assault Awareness month:

One of our most informative and intensive stories was our daylong coverage of the TEDxUofM conference on April 1. The theme of the conference was “Subject to Change,” and it showcased the work of some of the most innovative and forward-thinking members of the Michigan community. We alternated beween capturing soundbites from participants’ TED Talks as well as conducting 10-second interviews with each speaker. Having the opportunity to attend the conference and share it with our audience was immensely rewarding, and we hope that the story inspired followers who couldn’t be there in person develop and spread their own “ideas worth sharing”:

Finally, we had the opportunity to bring our followers behind the scenes of two major musical events on campus: Vic Mensa & Lil Dicky, presented by Big Ticket Productions; and Migo, the featured performer at SpringFest. Featuring footage from the performances as well as some backstage activity, the stories provided a fun, exclusive look at these sold-out concerts. Best of all, we were treated to a guest appearance from Coach Jim Harbaugh in both stories. We caught a glimpse of him performing the national anthem with Lil Dicky, and we saw him receiving a personal one-on-one tutorial on Migos’ signature dance move, “The Dab.”. Although it was different from the academic-oriented content we typically feature, it was a wonderful way to authentically capture student life.

The end of the academic year is always bittersweet, but looking back on the our successes is incredibly rewarding. We’re looking forward to a productive summer and hope you’ll follow along! #GoBlue and #StaySocial.