Conversations for Change: We’re On The Same Team 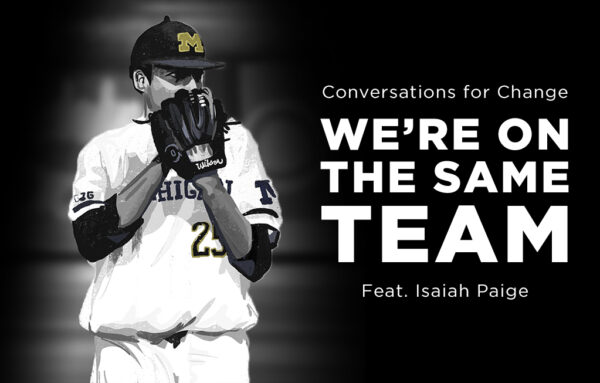 Michigan senior and baseball player Isaiah Paige discusses his experiences as a black student-athlete, where he hopes to see change, and how his inspirational TikTok gained so much traction.

Q: A week or so ago you made a TikTok that went viral; it has over 320,000 views and almost 75,000 likes already. Could you talk a little about your motivation behind it and how you’ve seen it make an impact already?

Yeah so I kinda started TikTok as a joke, which I feel like a lot of us have done during this quarantine. But I started to gain a little bit of a following, specifically in the youth baseball aspect. I had a lot of kids DMing me for baseball advice, and so as this stuff started to happen, some kids were asking me for my opinion on what was going on. So I told them I wanted to think about it, I wanted to listen to some people and what they had to say on both sides of the argument. I think that’s the best way to kind of formulate your own opinion is to listen to both sides.

People responded to it well, and I’m glad I did it. I’ve received some hate as of recent but I guess that’s kinda what you get for posting it on social media. Overall, it’s been very positive. I’ve gotten some cool baseball players that actually have reached out to me, which has been awesome. It’s been a positive experience.

Isaiah’s TikTok video reads:
“I’m an African American baseball player
Which makes me a minority in the sport.
A lot of times people ask me
What it’s like playing a white person sport.
I laugh, because they don’t get it.
Every team I’ve ever played for, color never mattered.
We played together.
We supported each other.
And we loved each other.
The game has given me some of my best friends
And my greatest mentors.
I don’t have all the answers but I do know
If we love everyone how we love our teammates
Everything will be OK.
RIP George Floyd”

Q: What are those negative voices and responses like and how have you dealt with those, if at all?

Yeah. I think baseball kinda prepared me for it because obviously, you know, something I’ve learned from baseball is if you live by the cheers, you’ll die by the boos.

You can see how different the audiences are based off their responses. A lot of my responses on Twitter are a lot of mature, older people who do recognize that baseball is a primarily white sport and the percentages are in favor of the white players. While some of the younger kids who are on TikTok especially, and Instagram, just kinda don’t get it so they don’t really know the demographics or how things work.

It’s been super super cool. You know, with posting anything controversial, you’re gonna get some feedback, and I think a lot of it is just people not exactly knowing the truth. But they’re young kids, so I can’t really blame them for it. I didn’t know that at a young age so eventually they’ll get it and I can’t be mad at them.

Q: How do you think your experiences playing baseball at Michigan translates to being a minority student on campus and in the classroom? How has that experience been for you overall? 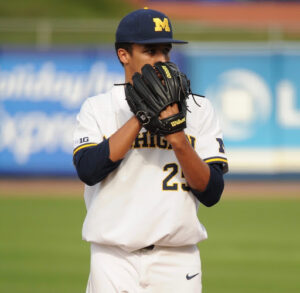 I guess I never really realized I was a minority until high school. When you’re young, you don’t really realize what’s going on and you don’t see the differences in the dugout. But then especially as I got to college and my coach started to talk about it, I wouldn’t say I’m a rarity but I definitely stand out in the fact that I’m an African American baseball player. People definitely don’t give me as much hate because I think people are very sensitive about that topic at Michigan, and we recognize that things do need to change as far as the inclusion on campus and on campuses everywhere, not just Michigan. I receive a lot of positivity from it. People say I’m setting a good example about what I’m doing on the field and especially now off the field. So many of my Michigan peers, like you and my teammates and people in PEK [Phi Epsilon Kappa], are just being so supportive of me and I think what I posted is going to be a step in the right direction.

My coach always says that he wants his team to look like the United States of America. He’s trying to be at the forefront of trying to lead more diverse college baseball rosters. We only had seven people that were minorities last year and I think we were one of the top five programs with minority baseball players, which is insane.

Q: Is there any type of progress that you specifically hope to see?

Something I’ve talked about with my teammates actually is: if you have a controversial topic that goes against my views, I don’t want us to argue to the point where we don’t respect each other anymore, which I think is a big issue. People are arguing to the point where it doesn’t get any points across and it’s not very productive. We need to have conversations that are productive and then if we don’t agree on something, we can still shake hands at the end of the day and I still respect you as a human, you just have different views than me. I think we need to work on having those conversations and being productive but also recognizing that there is a problem internally. If people disagree with you, you gotta respect them as people.

Q: Are there any specific actions that you want your peers or teammates to make in an effort to join this movement?

I think education is the main thing, which a lot of people have been prioritizing, which is very nice. Now it’s starting to come to light how brutal it is with all these videos.

I think realizing 1) that there is a problem and 2) knowing that not all, like I don’t believe that ALL cops are bad cops—I have an aunt that is a retired sheriff—like I know that for a fact, just from the fact that I have her to look up to.

“I think it’s recognizing the problem and doing everything that we can to correct the problem. I think education is the main thing.”

Q: Are there any final messages that you’d like to share about your story, your TikTok, your experiences on campus or just more ways to help facilitate and promote the Black Lives Matter movement?

I think that one thing I wanted to reemphasize was how important it is to start promoting more diversity in college baseball because one, of course there are Dominicans and Latins and, you know, Asians and people all over the world who are starting to play professional baseball in America, now but it’s still very white in college.

It’s also important because, you know, people want to look at other athletes and have them look like them so they can say, “Oh, I can do this.” The example I bring up is Steph Curry. Steph Curry, as far as his stature goes, is more relatable to a sixth grader or seventh grader because they’re not as big as some of the other kids, but maybe if I work on my shot enough I can shoot like Steph.

Q: Do you notice similarities between being a minority in baseball and there being a majority white players in college baseball and then that translating to University of Michigan’s demographic on campus?

Again, relatability plays a factor, you know: if you don’t see people around you going to college or pursuing their dreams of going to whatever university then you’re not going to think it’s realistic. I just think that when you’re a kid and you look up to people, when you see them do it, it makes it more realistic for you and I think it does play a factor in college demographics as well, seeing more minorities to go from inner cities and stuff like that, I think it does play a factor.