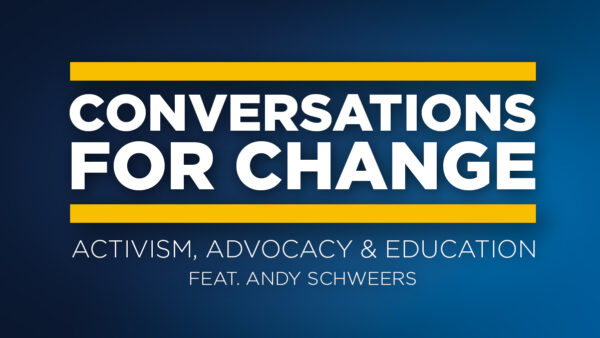 In this episode of the U-M student podcast Conversations for Change, Class of 2021 Michigan Ross graduate Josh Nichols talked with Andy Schweers, a Class of 2023 student studying environmental engineering and computer science. With Juneteenth in mind, their discussion focused on activism, education, and advocacy.

Schweers reflects on what he has learned and how he has grown over the past year since George Floyd was killed in May 2020. Following Floyd’s death, Schweers explains how he started conducting research into racial injustice and discrimination.

“I thought things were bad, but I didn’t realize how bad they were. That struck a nerve with me because I don’t know how anyone could really feel okay living in an unjust society,” he says.

Schweers references his privilege as a white male and the realization of how much that impacts his everyday life. That led him to move into activism — attending approximately 30 protests over the summer of 2020 and talking with individuals who had personal experiences of discrimination, racial profiling, and brutalization.

He also shares takeaways from conversations he had with people who have experienced racism for decades, and how much still needs to change.

“Hearing stuff like that was really eye-opening. These people have been living with this for decades and have been promised change for so long,” he says.

Schweers explains how he uses his social media platforms to share factual information and help more individuals learn about activist organizations that provide opportunities for engagement.

“I think social media is a really powerful tool that most people can access easily to educate themselves and expose themselves to social issues that they might not normally see out in society,” Shweers says.

Schweers and Nichols discuss protests and how different people feel about attending them. Schweers says he wasn’t fearful of attending protests but he knew that others, particularly people of color, did have hesitations  and concerts for their safety.

“As a white person, I really have never feared law enforcement,” he notes.

Nichols, who is a Black male, adds his experiences:

“I certainly have had my fair share of times when I’m a little hesitant to go out and protest, or just even share my opinion out of fear of just overall rejection, police brutality, things like that,” Nichols says, adding that hearing how Schweers has used his platform to be an activist is uplifting.

The two also talk about the steps that the University of Michigan has taken to promote Diversity, Equity, & Inclusion initiatives, including race and ethnicity courses and requirements.

“What encourages me about the steps they’ve taken so far is that they are making a conscious effort to make positive change,” Schweers says. “I think it’s really great that they’re putting their best foot forward.”

Nichols adds that as an undergraduate student he took a race and ethnicity class that was incredibly informational, and he feels it is something that all students benefit from.

Listen to the full conversation for more