Conversations for Change: Athletics and Advocacy 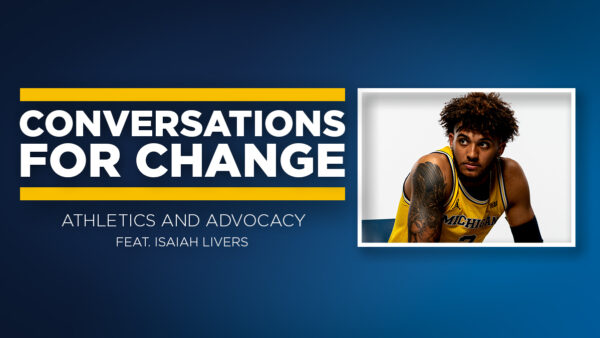 The second season of Conversations for Change features casual conversations with some of the University of Michigan’s brightest students, faculty, and leaders and best. In this episode, U-M Social intern Cam Turner, class of 2022, interviews Isaiah Livers.

For the last four years, senior U-M basketball forward Isaiah Livers has demonstrated his dedication to the sport and Michigan Basketball on and off the court. In the latest episode of Conversations for Change, Livers joins U-M Social intern and class of 2021 student Cam Turner to discuss being a Black student-athlete at U-M, how the COVID-19 pandemic has affected his experience, and the true meaning of “the team.”

Livers, who grew up in Kalamazoo, Michigan, was originally a fan of Michigan State University—until he visited Ann Arbor.

“I visited the Michigan campus, and I just fell in love. They’d take athletes on these tours. We’d walk around, back in the days where you could just walk around. They took me to the Big House, I got to see Crisler, we went to the Diag…and I don’t know if they brought me on the right day. It was sunny. It was just beautiful, and that’s when I knew.

“And then obviously the coaching staff, they were huge for me. And it just felt like a family the moment I stepped on campus,” he says.

Livers says he is grateful for everything he has learned at Michigan so far and all the friends he’s made, and the support he has received from others throughout his college journey.

“One thing I’m happy about, as a Black student-athlete, is that I’ve met a bunch of people of different races that support me, and I support them,” Livers says.

Livers says the most inspiring Black athlete for him is Jackie Robinson, because he was the first African American to play major league baseball.

“That was a time where no Black person was playing that high, and especially major league, because it was a white man’s sport,” he says. “And the fact that he was there alone doing that by himself just shows how brave he is. We can take a little page out of his book because he was just courageous. He was brave. He wanted to play the sport he loved.”

He notes that the recognition he receives from being a starter on the team motivates him to be his best self.

Livers also reflects on the past 11 months of the COVID-19 pandemic, recalling when the basketball team was preparing for the Big Ten tournament. As the team was warming up for a game, they were told to head back to the locker rooms. Shortly after, they learned that the entire tournament was cancelled.

“Seniors didn’t even get a chance to play in their Big Ten tournament or NCAA tournament. That really hurt me the most. I knew I still had another year to come back, but that really hurt because I wanted to go with them for their last ride,” he says.

Turner and Livers discuss the protests for social justice that took place around the world during the summer of 2020 and what it meant to them, and the changes that they hope to see as a result.

“Firstly, just peace between all races, no matter what color you are. I just hope for peace. Obviously, you have to start somewhere,” he says, adding that he would also like to see policies around police reform implemented as the next step.

Livers says he wants other athletes to know that they can use their platform to try to influence positive change.

“With everything that’s going on, I just wanted to be that voice, let other athletes know that it’s okay to speak up.”

U-M is known for its mantra “The Team, The Team, The Team.” Livers explains how important the team has been to him, especially in the past year, and how weekly Zoom calls served as an open space to talk about anything that was going on.

“Coach [Juwan] Howard, the whole staff, they were there for us in a tough time, even when we couldn’t go to the gym, and had the social injustices going on…that was a really hard time for all of us, whether you admit it or not. But I had my team to talk to, and I think that’s what makes us ‘The Team, The Team, The Team.’ And you can see it out there.”