Conversations for Change: Being Seen and Being Yourself 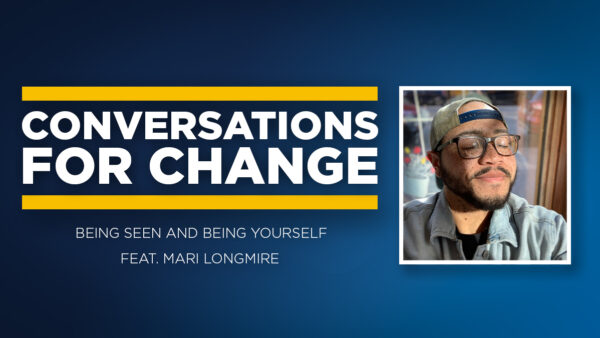 Discussing Gender Identity and the Trans Experience in America

The second season of Conversations for Change will feature casual conversations with some of the University of Michigan’s brightest students, faculty, and leaders and best.

Mari Longmire, University of Michigan alum and program specialist at U-M’s Educational Theatre Company, joins Conversations for Change to discuss gender identity, gender pronouns, and the experience of being a trans person in America. The conversation comes as we celebrate Trans Day of Visibility on March 31, an international awareness day dedicated to highlighting the accomplishments of transgender and gender nonconforming people while also increasing awareness of the work that still needs to be done to achieve trans justice.

“It’s always so fruitful, so rich, and such a complicated journey for a lot of people,” Longmire says of gender identity, adding that it can be a really complex conversation.

“We’re emerging in this time where people are a little bit more familiar with gender identity, gender expression, biological sex, as parts of this thing that we call gender. We’re starting to be able to interact with a lot of different media and celebrities and prominent people in our world who are trans and are also doing the work that I think a lot of non-binary and trans folks have to do in the public eye, which is some of the education work,” they say.

Longmire says that gender pronouns are dependent on the individuals and that there isn’t one simple answer for questions.

“Sometimes culture is like a stream. It’s like a river. There’s the energy. There’s the movement that goes down; that’s the dominant culture. That’s what we expect. And some of us get to float along comfortably on that river. We’re just like, ‘We ain’t got to do nothing’ and it leads us toward our goals, toward our aspirations, toward our affirmations,” they say.

For individuals who want to support the trans community and help address inequalities, Longmire recommends to start by listening and building relationships.

“Through the process of supporting someone or giving someone the space and the platform to be themselves, we all learn something.”

Until Trans Day of Visibility was developed, the only commemorative event the trans community had was the Trans Day of Remembrance, which recognizes trans individuals who were killed.

“I think that there was a desire to have another event, another celebration that celebrated the life, impact, and community of trans people in being visible. And also as an opportunity to build some momentum around the movements to stop needing a Trans Day Of Remembrance,” they say.

In celebration of Trans Day of Visibility, Longmire recommends telling the trans people in your life that they are important to you.

“A beautiful part of being trans is being in the community and being able to live out the dream as opposed to the nightmare. I think that there’s something really to remind the folks in your life who are trans that you love them, you see them, and you’re there to support them,” they say.

As far as being a member of the trans community, Longmire shares their brightest moment — that they know who they are and no one can take that.

“I think that being trans is about this relentless commitment to understanding myself and having the courage, willingness, community, and support to be myself. Full stop.”