Conversations for Change: Our Stories Are All Valuable 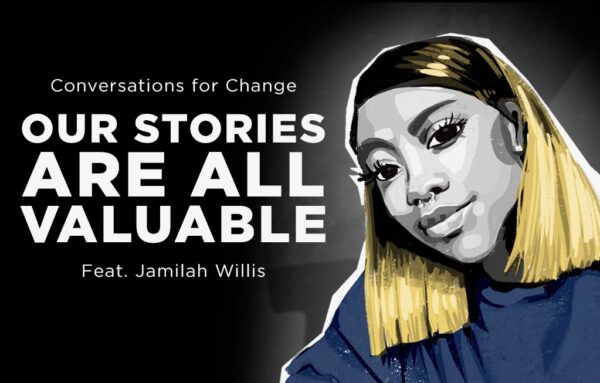 Q: Hey Jamilah, thank you so much for being a part of the Conversations for Change podcast. Can you tell us a little bit about yourself and why you want to be a part of it?

First, let me say thank you for having me, and I’m a part of a couple of different things on campus. One of the things I’m involved in is this magazine called Consider Magazine. We try to get different perspectives from different students on campus and make those known. It’s really about being able to tell people’s stories and hear their voices. So that’s really important to me and I hope I get the chance to do that, too.

Q: What else do you wish people knew? We don’t really seem to learn about the narrative of racism in history class, or even our U-M classes.

I didn’t even understand or believe in racism when I was younger. You probably wouldn’t believe it, but I didn’t know what that was because I grew up in a predominantly black place — I’m from Detroit.

My mom’s also from West Africa. So she actually took me to Africa and I saw my family in Africa and we’re all brown people. So when I came back here, I had very little exposure to racism. But when I came to college, I definitely was able to learn a lot more about what racism actually was, how it impacts people, what it actually feels like. It doesn’t feel good at all. But then I got to read Angela Davis, Toni Morrison, Nikki Giovanni, big names but also some smaller names too that I can’t remember. We talked about Black Lives Matter movement in a couple of my classes. I also took a black revolution class.

That’s one thing I am grateful for is just how I’ve been given access to all of this knowledge, because before I definitely had no idea that racialized systems even existed as strongly as they did. Coming here I guess definitely made me believe what I heard about.

Q: You came from a predominantly black community when you were growing up and moved to the University of Michigan, which is predominantly white. How was that transition for you?

I had never experienced it or never knew how powerful or what I would endure just because of the color of my skin. And I think the first time I experienced it was in my Summer Bridge Program that was going to help me prepare to be at university. I had this experience at one of the stores on campus. This is my first time, my first independence being on campus, and the store owners kept asking me, “Do you need something? Do you need something?” And I said “No.”

And at first I was just comfortable looking at the perfumes, then I noticed she started following me and she asked me again and I’m like, “No, I’m looking at the jeans.” She asked me again, she’s following me. I said, “No.” Another group of people come in and they’re white and she greets them and then she leaves them. And then she continues to ask me, while I’m around the store, do I need something? And I just got so uncomfortable that I literally just left and I’ve never shopped at that store again.

Q: What are some things that you hope to see in the future? Because I think there is a lot of momentum right now. 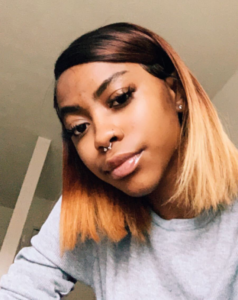 I think what I’ve had to accept and realize is that unfortunately this is trending. Black Lives Matter is trending and so that’s why there’s all this conversation and I’m happy that there’s a dialogue. I’m happy that that’s happening and I think that there can be change with all the, like you said, momentum that we have right now. But unfortunately, the reality is this isn’t going to be important to everybody for very long. This has been going on for a very long time. I literally can sit with my grandmother and we talk about how back in her day is literally right now. So I think what I really want to see, at least in the judicial system, is some justice brought to light for the people who have been murdered. I want to see that before this trend is over. I want to see people signing petitions. I want to see people protesting, and going out there, and trying to get justice for the people who have been murdered.

Racism is everywhere. It’s ingrained in so many things. And so I don’t think by the end of this trend that we’re going to end racism at all.

I challenge everybody who doesn’t think that they’re doing enough, to do something in this moment because we all have this moment to do something. And I think we should all be at least trying to get justice for those who deserve it.

Q: As a black woman on campus, what are some things that you hope to see from the university?

And I think I want to see more boldness, unfortunately. I don’t even think it should be considered a bold move. But I think we just need more of a stance and we can’t be ashamed of admitting what the history of this privilege and bubble that we are in, where did that come from? You know what I’m saying? Like when this university became what it was, who was defined as the leaders and the best? Who did this university serve and who was beneath that who was not even considered? And unfortunately, that still is carried with us today, even though that’s not the message that we send at all.

I actually think we send the opposite message.

Racism is very messy. So I think we need to be more mindful and take more care of our black students and black faculty.

Like I said, it’s a great dialogue, but this is literally reality. This is just reality. This is just another day. The only difference is now everybody’s timeline is blowing up and people are, I guess, talking about it more. But the reality of the situation is no different from a couple of months ago.

But I guess I’m just trying to say imposter syndrome is very, very real. The white gaze is very, very real. And as a person who is not white or doesn’t identify as white, you have to live through that. And sometimes people tell you that you have to live in this white gaze in order to be successful in order to have the world recognize you and respect you honestly. And that’s a lot of pressure.

So I would tell the people who have power in this university that we really need to be taking better care and listening to the black community. We need to be standing up for the people that try to enter this space and make sure that black people feel protected because there are definitely times at this university that I have not felt protection. I haven’t felt wanted. I haven’t felt like I deserve to be here. And I don’t think that anybody should feel like that.

“Our stories may sound different, but they’re all important. They’re all valuable.”

Q: Our parents’ generation has been taught to not see color. It is changing, to seeing people’s color, seeing their backgrounds, seeing where they come from. That’s very important and valid in everyone’s life story. What is your perspective on the importance of actually seeing people’s color and not just trying to ignore it anymore?

Yeah. That’s a choice to be ignorant. And when you’re in a place of privilege, it can be very hard to even acknowledge that you have privilege.

And if we could change that hatred, people would really notice and change the way that they are literally treating human beings. And then if the people who are guilty were brave and said something about how wrong that is, that’s powerful.

So I would challenge those people to really educate themselves because it’s also miseducation.

Q: I love that. I completely agree. There are a million other things that make up your identity other than the color of your skin. Is there anything else that you want to say?

There was a good class that I took where my professor brought in a white guy who worked in Detroit alongside organizations that were helping the community. He was an ally. I was so taken back and surprised by him and I was actually so glad that I met him.

A white student asked, “So how do we help the people of Detroit? What can we do?”

And I love this man for it. I feel like he’s my spiritual uncle, because he is just so wise.

He said that it is not white people’s job to be the white savior. The white savior complex: this idea that white people need to come in and need to save black people or even people of color. He was like, “No, that’s not what we need to do. That’s the exact opposite of what we need to do.” What white people should be focused on is really saving themselves. This is a job and a call to white people to save themselves from ignorance and privilege because in a hierarchy, there’s people on the bottom and there’s people on the top. White people are those people on the top. The best way that they can help out the movement is not by just going somewhere and saying let’s fix this. It’s okay. Sometimes, it might look exactly the same. Sometimes, volunteering at some place as an ally with good intentions is good.

“The fight for black justice is really a fight for everybody.”

Q: If you have a message that you would like to send out to the community whether it’s U-M, or whether it’s the broader U.S. community. Whatever it is, just go for it. It could be anything: a call to action, hopes, whatever you want.

Well, if it’s whatever I want, I am a huge believer in you can’t help anybody before you help yourself. I guess my call to action is let’s really heal. Let’s start with ourselves. No, that’s not going to solve everything, that’s definitely not going to solve everything, but I think that we need to figure out how to get our peace. I guess this is my call to black people because I think we just have been a disturbed community for so long. I think because all that disruption has been happening and there’s so many issues ahead of us that we need to come back to home sometimes and we need to definitely make space for ourselves. Remember, humanize yourself. Your mental health matters. You matter. Connect with some other black people. Make sure you’re heard. Just always prioritize yourself and your peace. Don’t ever put your peace at risk, always come back to home. Just find your support system. I think that’s it.

Thank you; that was a really beautiful message. Thanks so much for being a part of this podcast.