Conversations for Change: You’re Not Alone 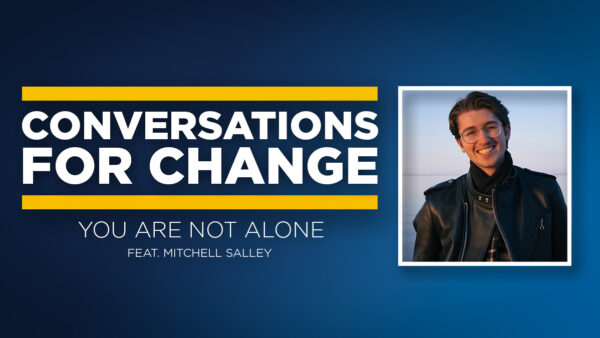 The second season of Conversations for Change will feature casual conversations with some of the University of Michigan’s brightest students, faculty, and leaders and best.

Mitchell Salley, rising fifth-year student with dual degrees in the film, television and media program as well as the communication and media program, joins the Conversation for Change podcast to talk about protecting and preserving mental health. Throughout the dialogue, which was held in May during Mental Health Awareness Month, Salley and Conversations for Change host and #UMSocial intern Cam Turner discuss changing the narrative around mental health and finding community.

Salley talked about the Maxwell Gray Film Fellowship, which is a program through the Eisenberg Family Depression Center that promotes student mental health through original video content. Fellows participate in the development, recruitment, production, post-production, and dissemination of videos on mental health, which also focus on diverse populations across campus and beyond.

“The Maxwell Gray Film Fellowship is all based around this idea of creating videos to speak to various identities and the ways that mental health and those identities overlap, because oftentimes, when we have discussions of mental health and different identities, it’s not the same conversation; they’re treated as two separate issues, when the fact is, they’re linked because it’s within one person,” he says.

He continues to explain how the fellows seek out students of color, LGBTQ+ students, and first generation students among many others, to share their mental health journey to help others who may be facing similar struggles.

“We’re building this database of all of these different types of people from different walks of life and different backgrounds, and that way, people can come from any sort of place and see that there’s somebody else like them, who’s maybe been through what they’re going through now.”

“It’s this idea that there is always a way forward, no matter what challenges that individual might be facing.”

Salley emphasizes the importance of protecting and valuing mental health, and talks about how mental health can decline when someone feels isolated, which has been a concern throughout the COVID-19 pandemic.

“One of our taglines is ‘you are not alone,’ and all of our videos end on that idea because we need to fight against that idea that you are alone,” he explains, adding that the Fellowship is working to position conversations around mental health in a more positive light.

As an Ann Arbor native, Salley says he feels lucky that he was close to home when the pandemic began, but it was still an adjustment to move back home and continue classes virtually while trying to keep in touch with friends.

“I’ve realized how much I took running into people for granted and that I wasn’t necessarily doing the work of keeping up those close relationships in the way that maybe I’d like to,” he says, adding that he has found he’s better at reaching out more often to his friends now than before the pandemic.

His top mental health tip for fellow college students is to build time for yourself that is separate from school work, jobs, and internships.

“Something that is fully your own, that only you can do and that only benefits you, is so important because it’s so easy right now to just jump from one project to the next, to class, to a meeting, to a hangout with friends. Even if they’re things you like…it can still be so overwhelming because we’ve had this crushing of personal and work and class life all into one space and into one time — it all just compounds onto itself.”

In his time working with the Fellowship, Salley says he has learned the necessity of giving space to individuals to share their stories, especially to discuss a topic like mental health that still has a stigma around it, and encourages others to do the same.

“Even within our generation, that stigma still exists. I think as we go on, it’s lessening, but we still need to do the work to remove that stigma. So opening up and listening to other people, even if you don’t have any advice to give them, knowing that everyone’s on their own mental health journey and that everyone’s going to be at a different place and need or want different things from you, is the key to getting better,” he says.

LISTEN TO THE FULL CONVERSATION TO LEARN MORE