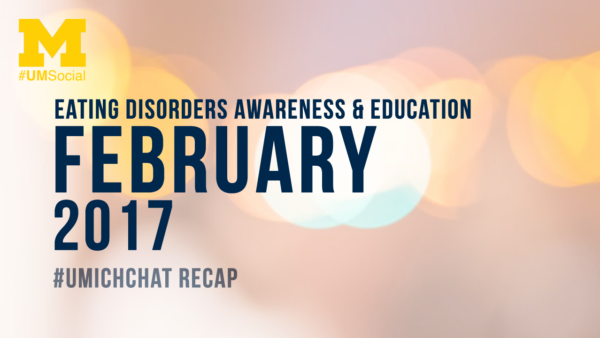 It’s estimated that more than 30 million Americans will develop an eating disorder at some point in their lives. Disordered eating behaviors are increasingly common among the young: studies have shown that 35 to 57 percent of adolescent girls engage in crash dieting, fasting, self-induced vomiting, diet pills, or laxatives. The National Eating Disorders Association found that most full-blown eating disorders begin between the ages of 18 and 21, with young adults in the college environment experiencing the highest degree of risk. Eating disorders are certainly a major health concern on campus; according to the most recent U-SHAPE survey at U-M, 28 percent of female undergrads and 12 percent of male undergrads screened positive for the disorder. Despite this, the survey also found that 82 percent of those women and 96 percent of the men did not seek treatment.

The take-away? Eating disorders impact millions of people around the globe, as well as a significant portion of our own campus. National Eating Disorders Awareness Week occurs later this month, so it’s a perfect time to start a conversation about the issue. In collaboration with Wolverine Wellness and the student organization Body Peace Corps, we hosted a  #UMichChat that brought together a panel of clinicians and activists dedicated to treating eating disorders and spreading awareness about body positivity as a crucial component of wellness. 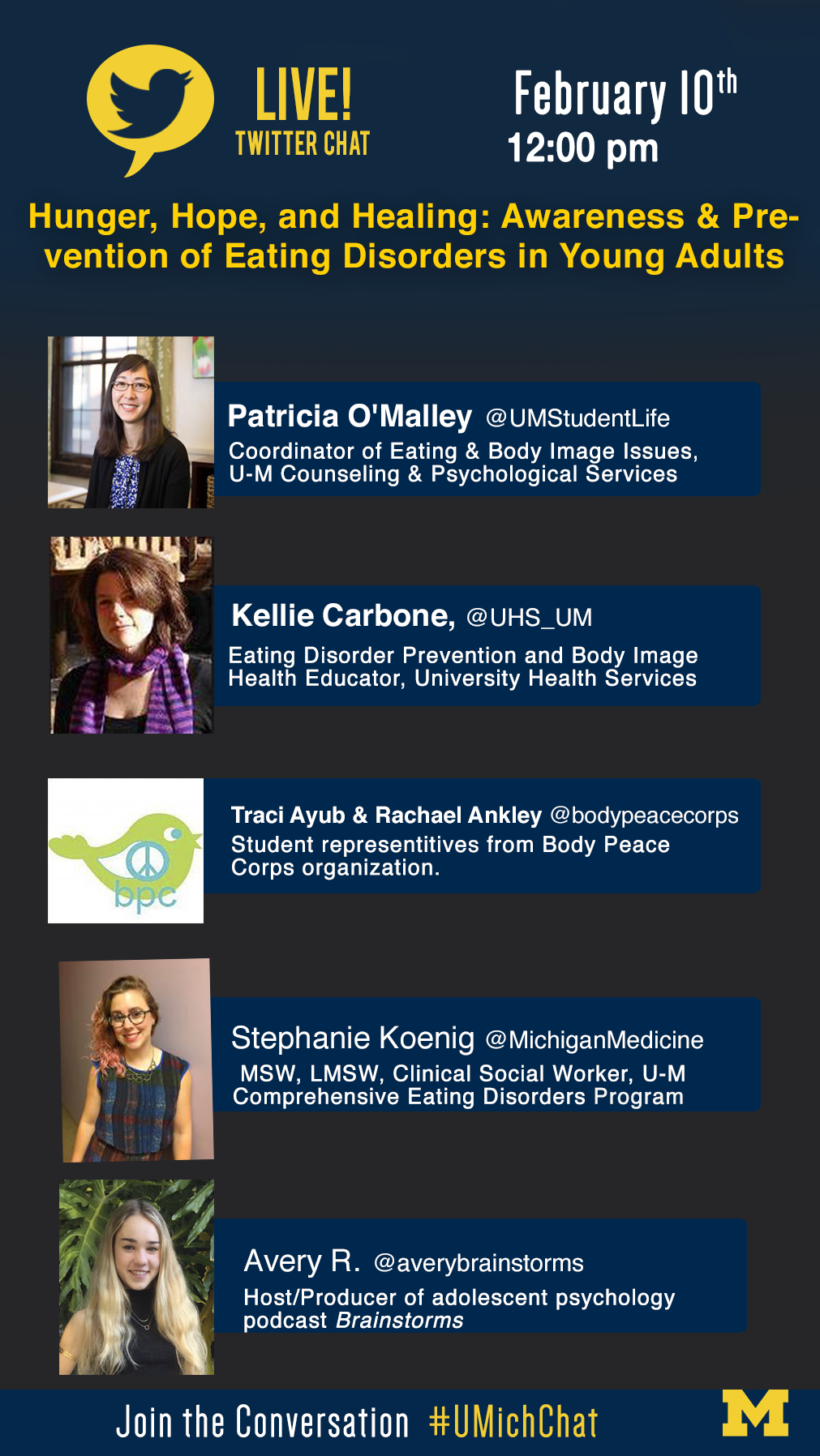 Our panelists to offered valuable insight into the warning signs and physical symptoms of eating disorders, provided statistics about the prevalence of eating disorders in the college environment, and expressed their views on why college is such a perilous breeding ground for disordered eating behavior: 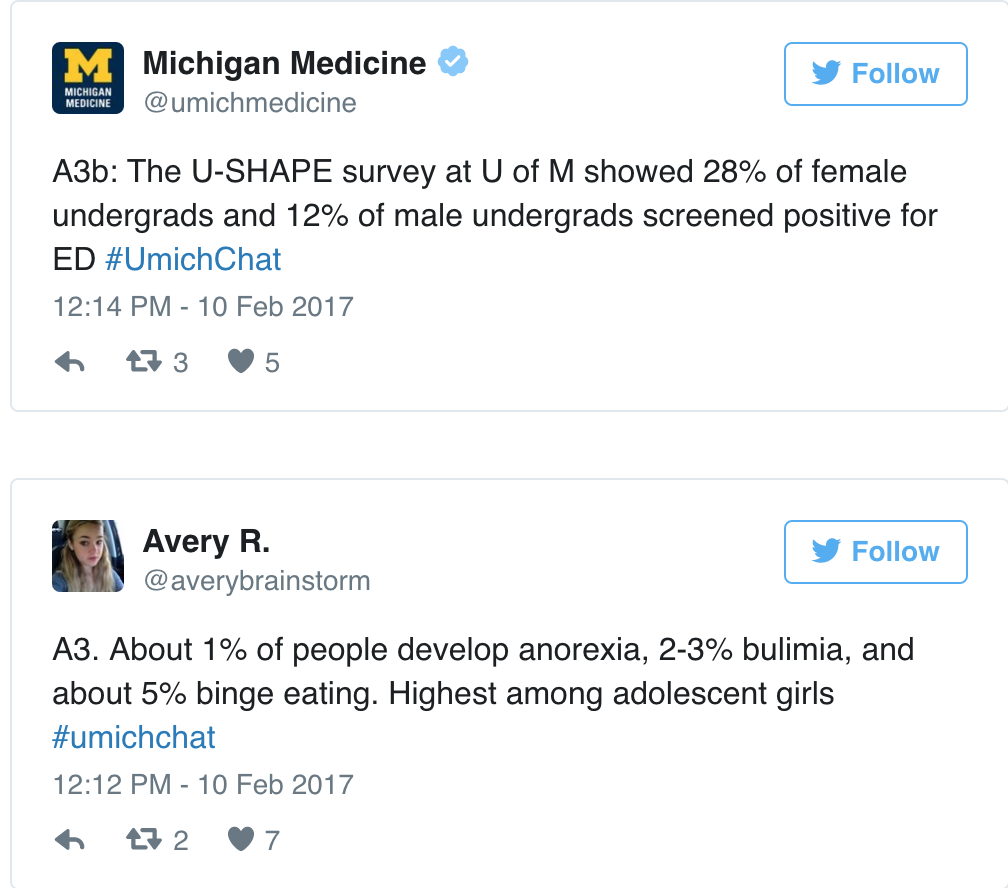 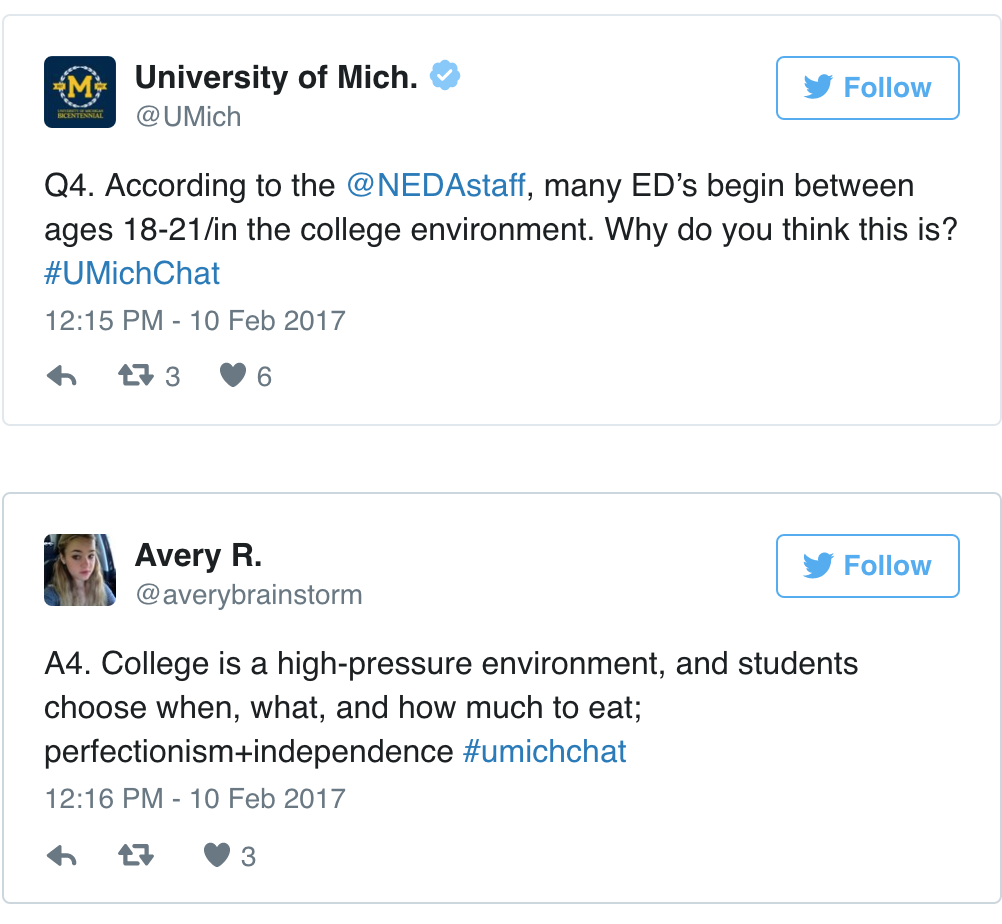 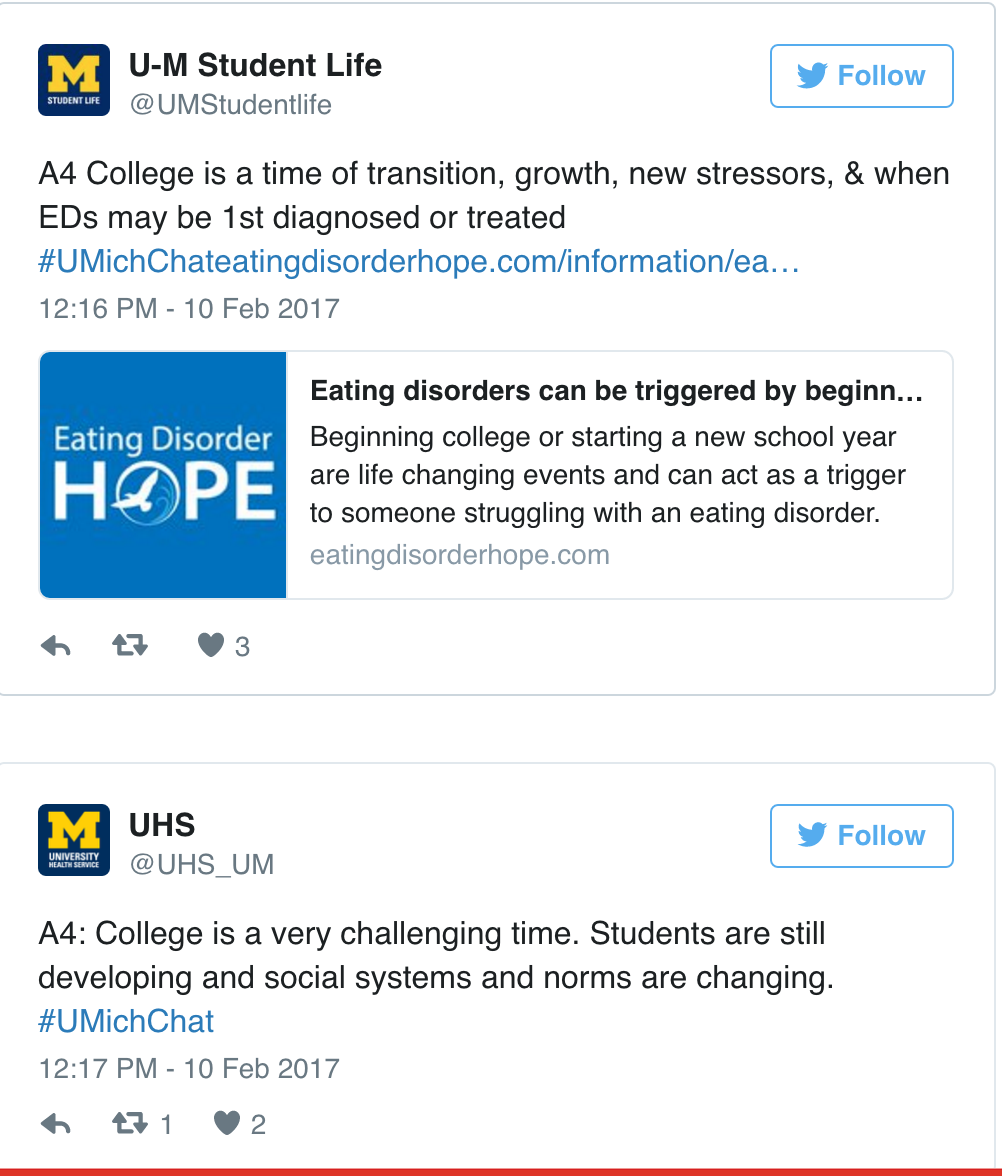 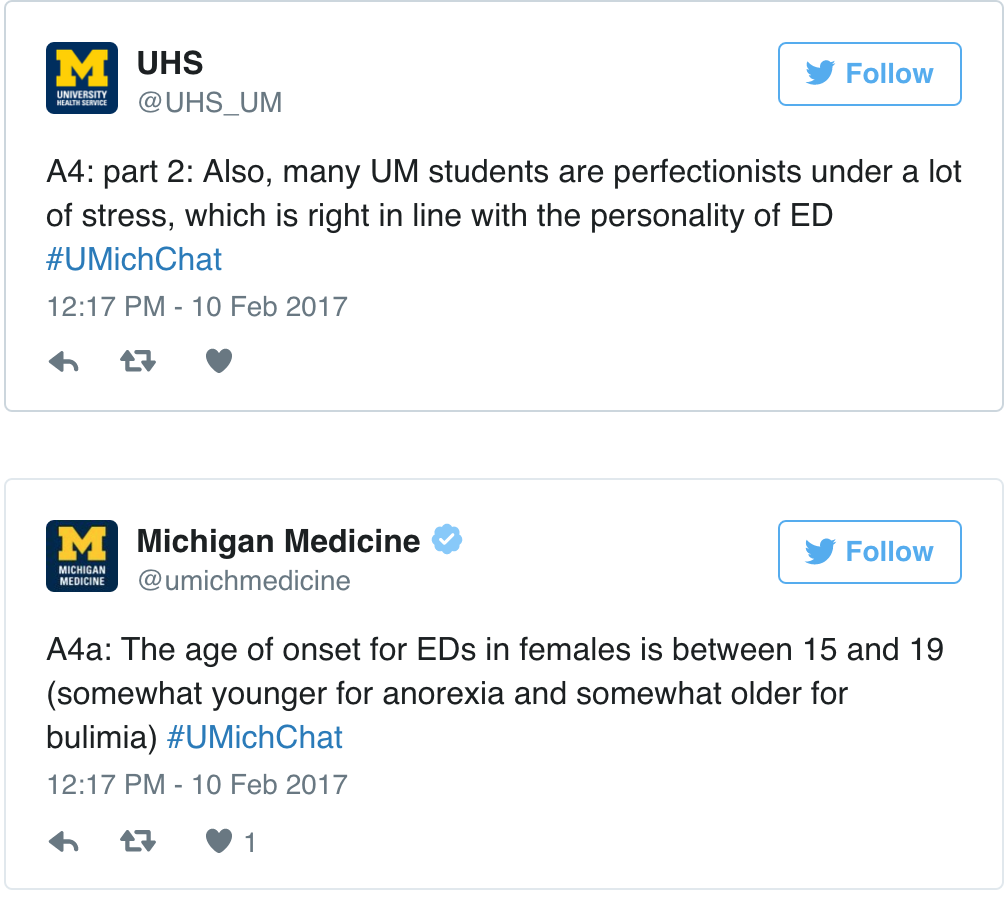 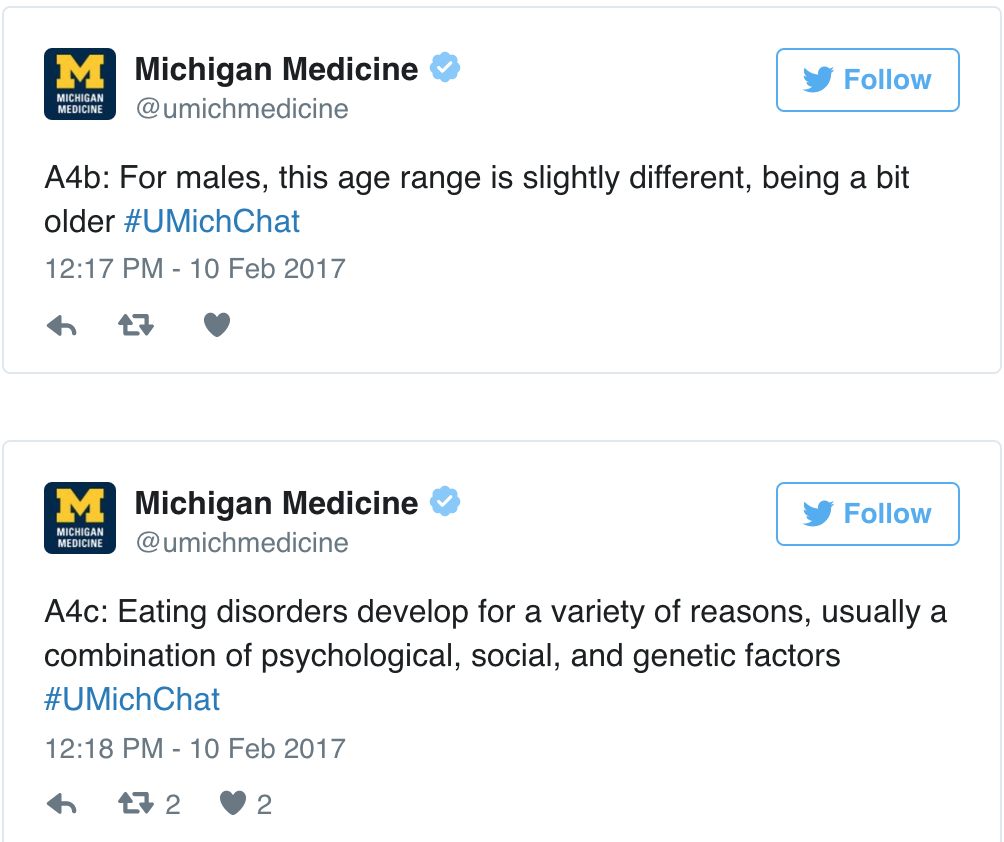 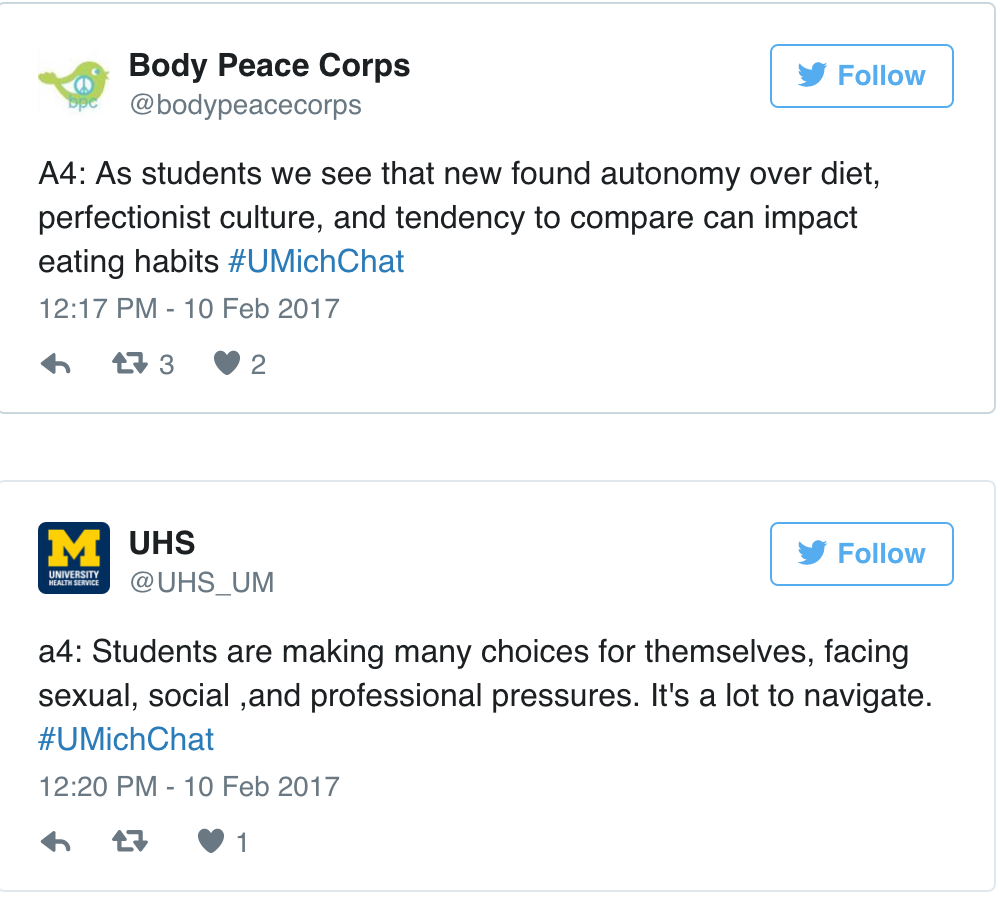 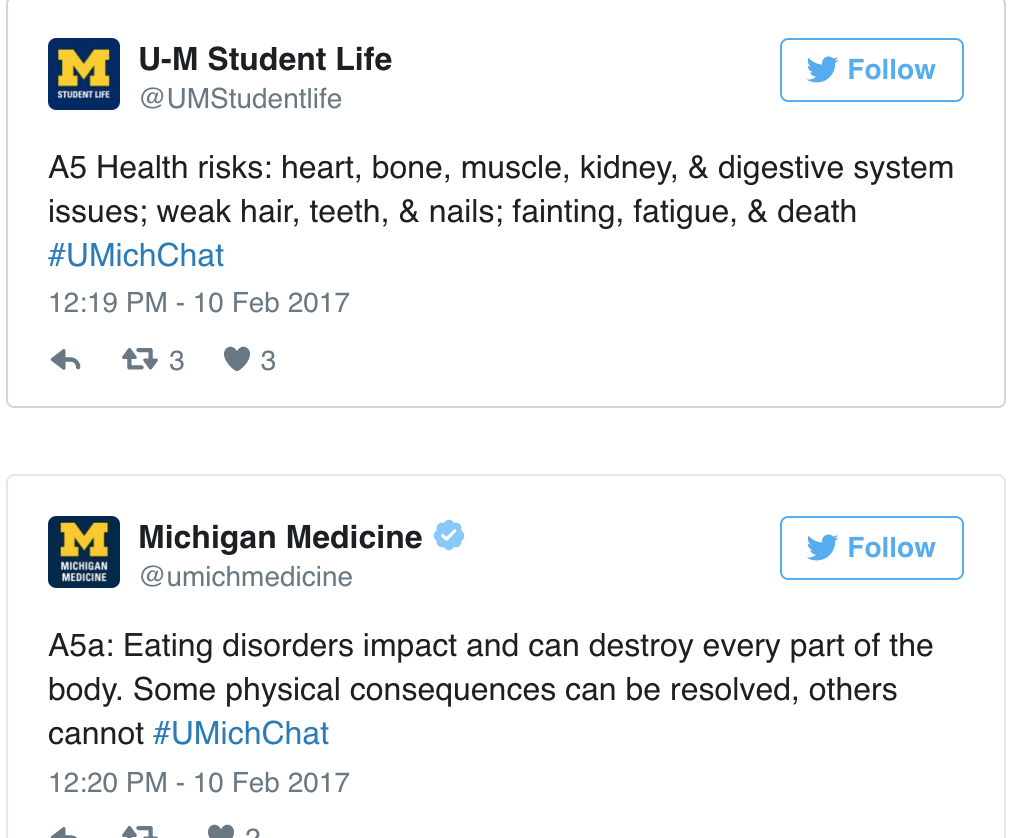 Additionally, our panelists shared their beliefs about the societal factors that contribute to the development of eating disorders, as well as the most commonly held misconceptions about eating disorders that they aim to dismantle through their work: 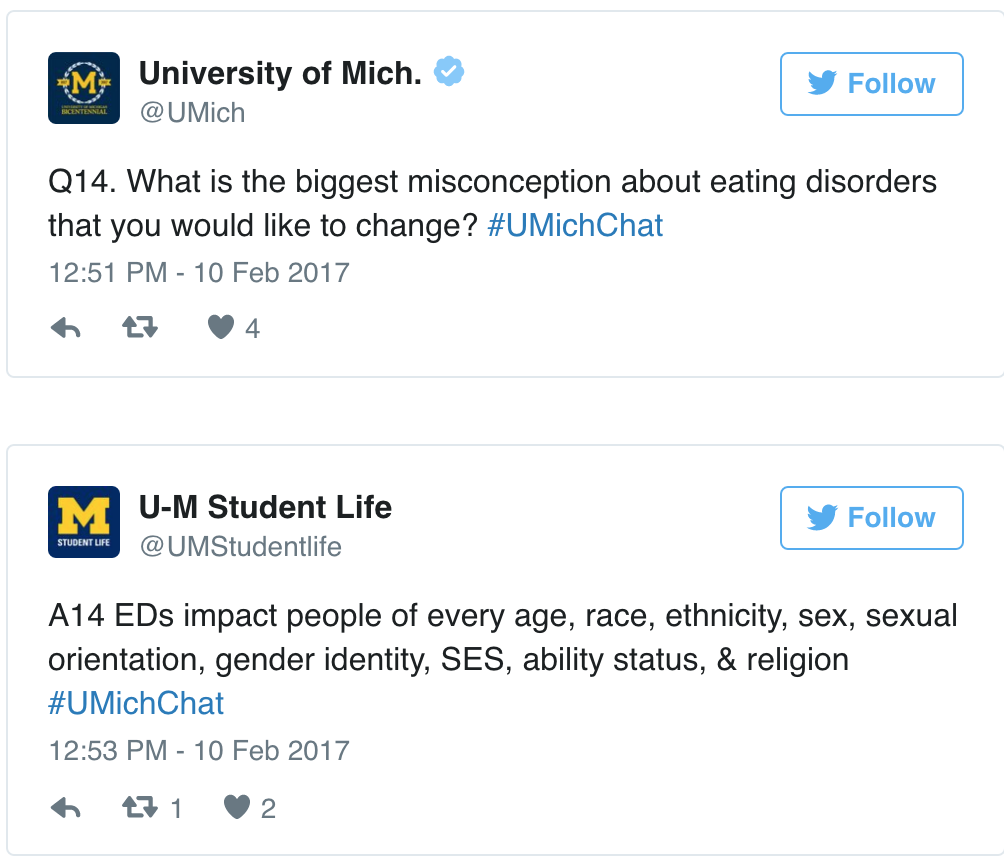 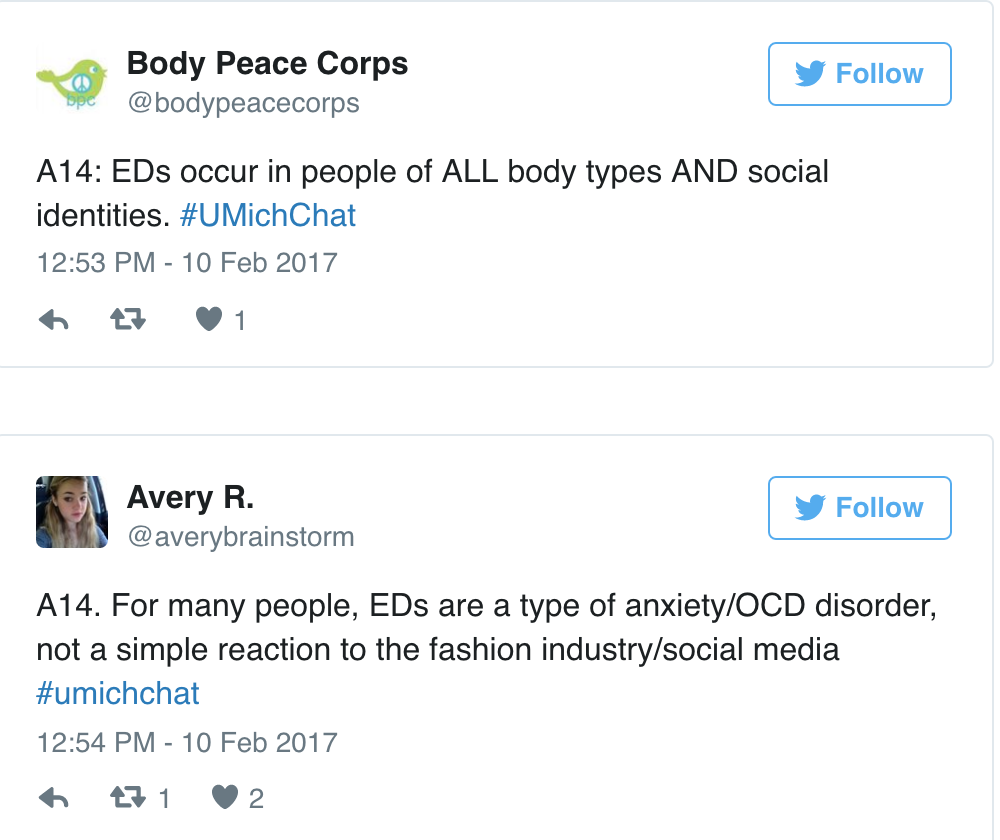 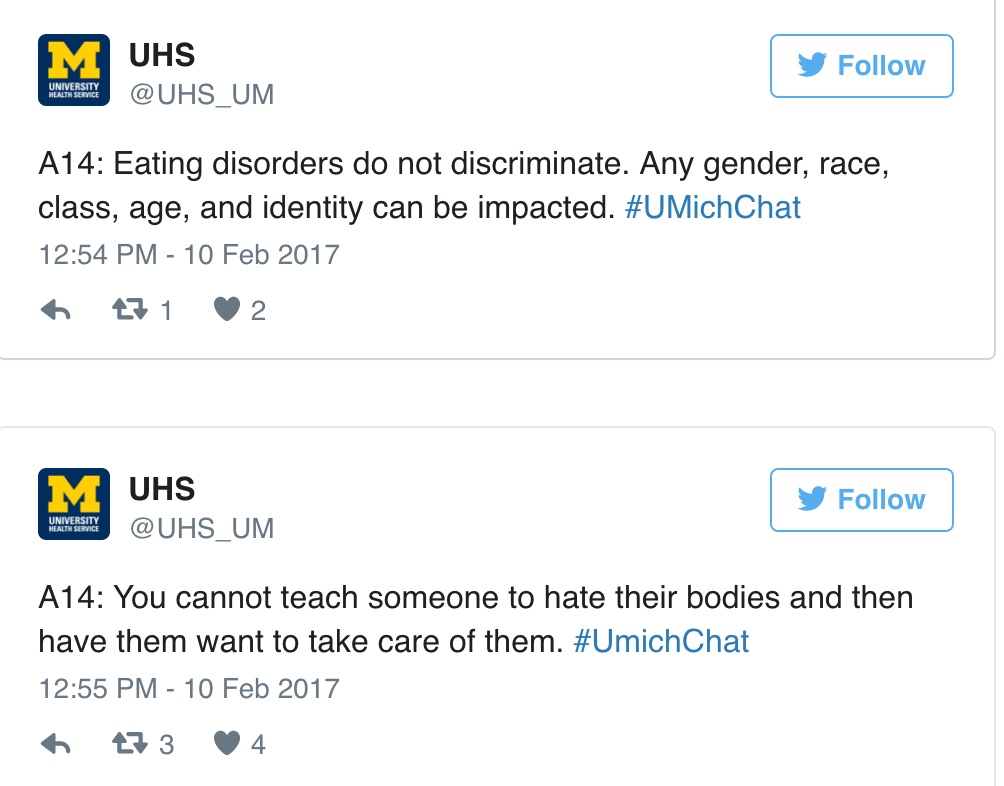 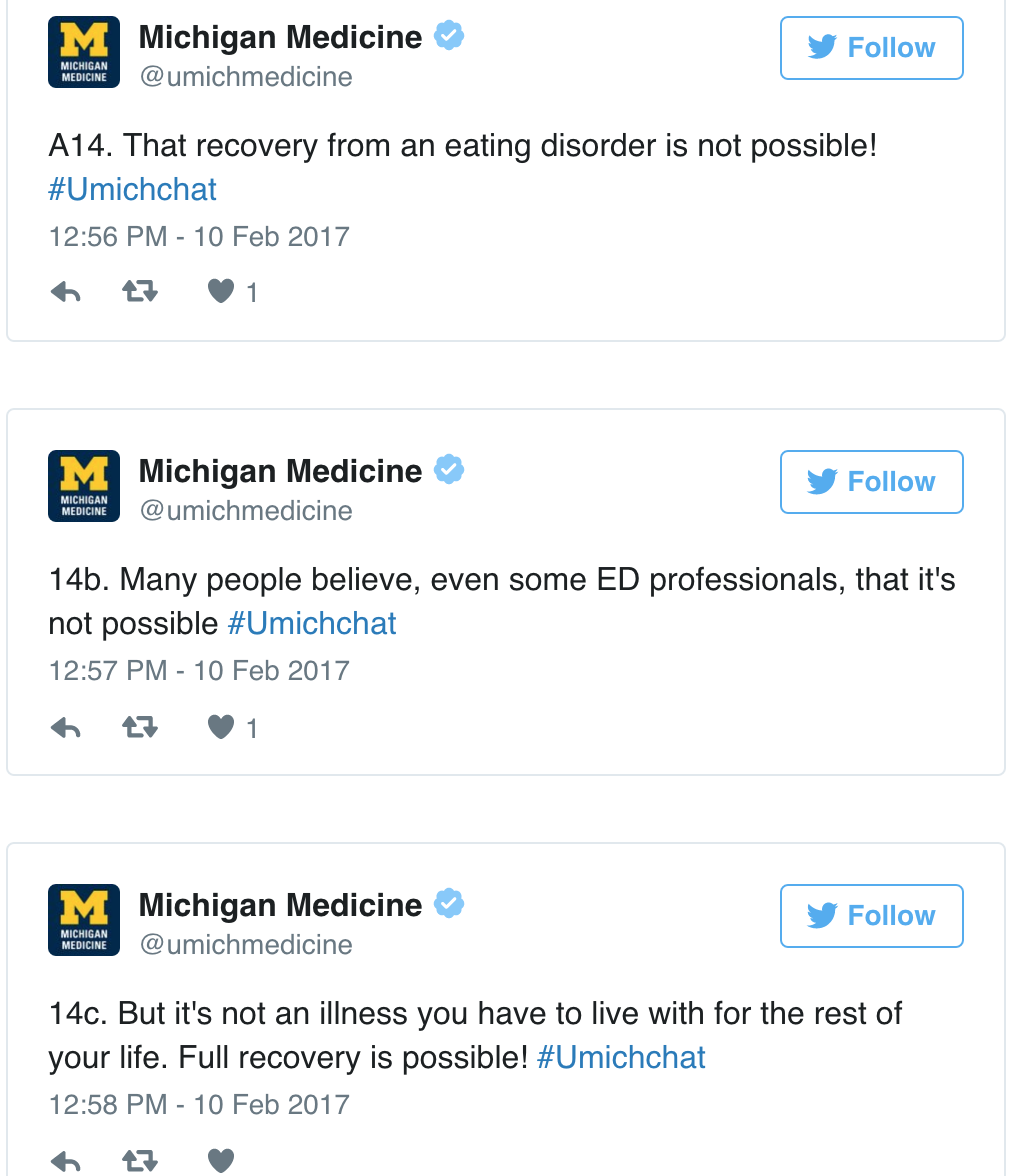 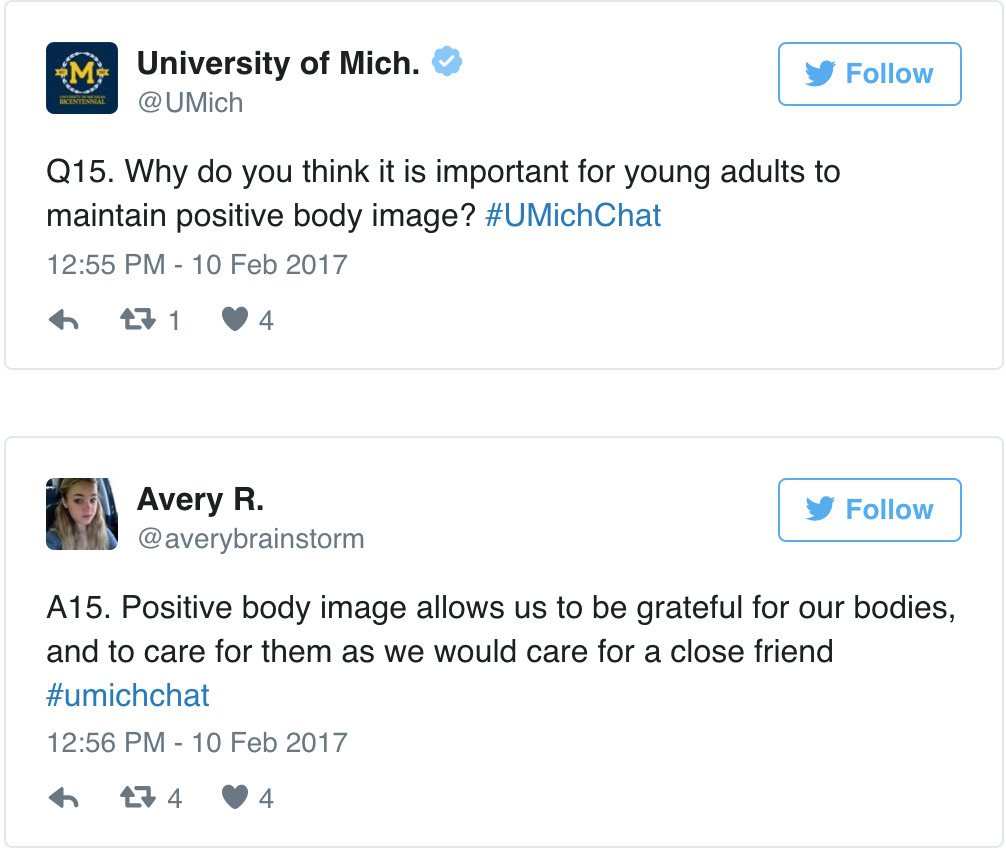 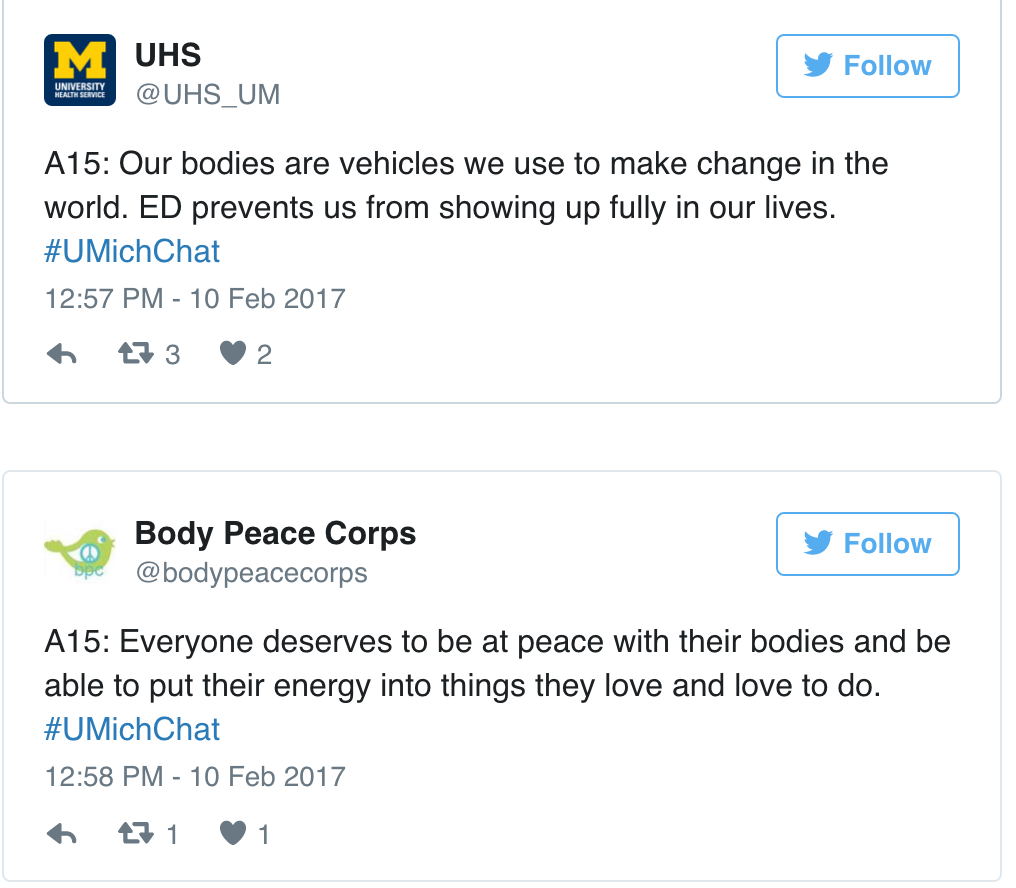 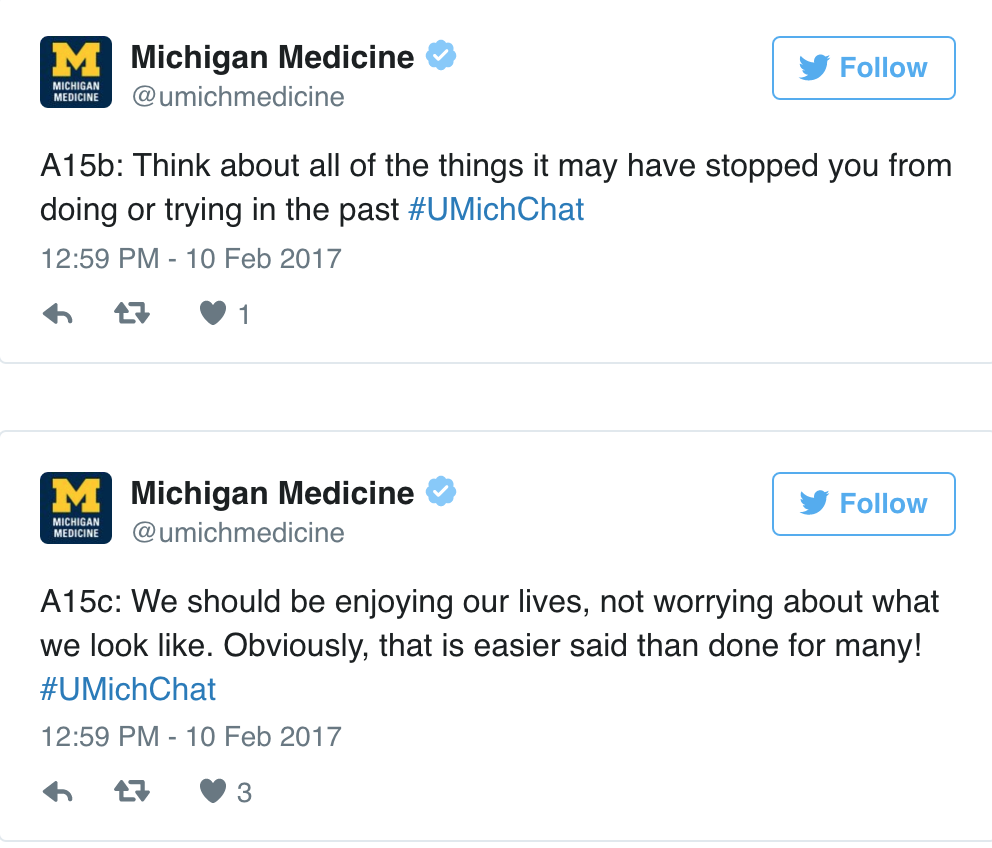 In addition to our established panelists, several other university departments and individual followers joined the conversation. The U-M Depression Center and University of Michigan Adolescent Health Initiative each responded to the chat questions, and many current students and alumni made their presence know as well. The promotional graphics for the chat were shared widely via several on-campus units. Michigan Medicine, U-M Student Life, and University Health Service, among others, publicized the chat and urged their followers to tune in.

The National Eating Disorders Association (NEDA) also participated. NEDA has a Twitter following of more than 30,000 people, many of whom have no connection to the university. So their participation helped bring our conversation to a much larger and more diverse audience than we previously had access to. NEDA also promoted the chat on their website, which receives thousands of daily visits from people all around the world.

As a result of the successful cross-promotion, this chat had an extensive reach and generated copious engagement from audience members both in and outside our community. In the days that preceded and followed this chat, the #umichChat hashtag was used more than 200 times by 73 unique Twitter users. During this time period, tweets containing #UMichChat reached an audience of nearly 300,000 people, making more than 6,000,000 distinct timeline impressions.

We’re extremely pleased with the impact of this chat and see this trend continuing as we host other conversations on topics of interest to the campus community.

If you missed this conversation, you can check out our archive on Storify.