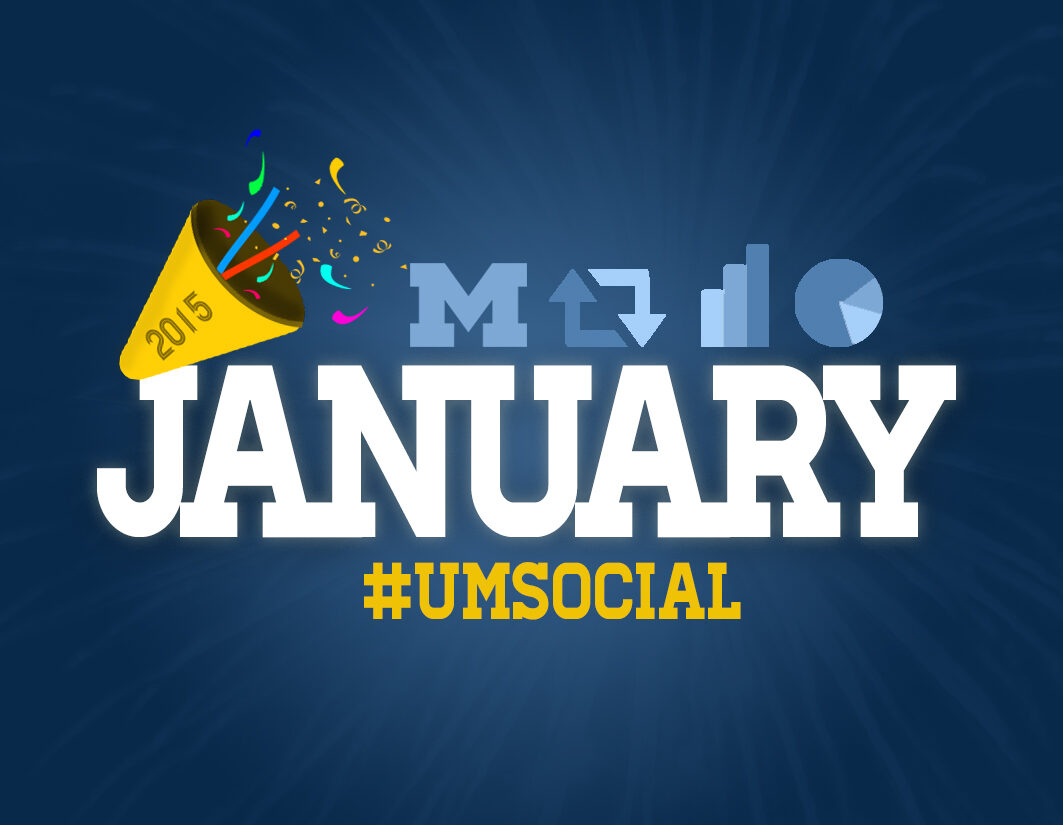 January brings about new beginnings: a new year, new semester, and new opportunities to engage with our Wolverines. It’s also the perfect time to reflect on the past, identify what was accomplished, and establish what our next steps should be moving forward. After looking at this month alone, I have a strong feeling that 2015 will be an exciting year for our team and for the University of Michigan. As always, we present you with January’s monthly social-in-review, which highlights notable campaigns, social content, and digital innovations.

According to QS World University Rankings, UMich is the top public university in the United States. In order to bring students into the conversation, our team headed to one of the many organization fairs on campus to receive student input and reactions. We wanted to know, what sets Michigan apart from other universities? The set-up was simple enough: we had our cameras rolling and asked Wolverines to explain why UMich is their #1. In doing so, we were able to bring this numerical ranking to life and create a more personal narrative for our followers. As an incentive, students who offered up their own stories received T-Shirts that sported the new #1 ranking. The video was shared via Facebook, receiving 7.5K likes, 1.9K shares and 140 comments. We also saw traction on other other channels, including YouTube and Vine. We look forward to producing more student-generated video content this year.

January means winter, and winter in Michigan means that it is cold. With the risk of record low temperatures, students have to be safer than normal and bundle up to avoid frostbite! Our team braved the weather and surprised lucky individuals with hats, scarves, gloves, and hand warmers to help get them to class warm…Michigan style. We hinted that we would be doing an on-campus giveaway via Twitter the day before, and followed up with live updates of our location. Spontaneous giveaways of this sort allow for us to engage with the campus community and remind them that we truly care about our Wolverines.

Additionally, we saw success on Twitter with our third #UMichChat, bringing in 912K impressions and an estimated reach of 325K, as well as content geared towards #SquirrelAppreciationDay. Read the full blog post here.

In the first week of the month, we reached an Instagram milestone–50K followers. Using imagery from our #UMichMoments campaign, this post brought attention to our achievement, but also incorporated many of the fans that helped us get there in the first place. Our account would not function without user-generated content, and so it was important for us to take the time to thank our following for being so excited about anything and everything Michigan!

On January 26, the state celebrated its 178th birthday. What better way to pay homage to our hoMe, than to throw a birthday party? In collaboration with Michigan Dining, Campus Information, and the Michigan Union, UMSocial brought a Maize & Blue party to campus, cupcakes and all. We saw positive response on Twitter the night before the event, and so we were eager to see how people would engage with us during the day-of. We were worried that we would have leftover snacks, and to our surprise we ended up running out in under an hour. This simple booth in a well-populated area brought in major crowds, drew awareness to our event, and resulted in positive feedback from fans on social media:

This month, we brought two new boards to our profile: Michigan Squirrels & College of LSA! Squirrel Appreciation Day offered the perfect opportunity to curate all of our squirrel content and streamline it into one unified place. Although we continually pin content relevant to LS&A, our uofmichigan channel did not dedicate a board entirely to the college. Once fully populated, this board will better direct students to the resources that they need regarding Literature, Science & the Arts. Interested in seeing your department or college represented? Please email umsocial@umich.edu!

In January, the campus community could engage with uofmichigan on Snapchat in more diverse ways than ever before, thanks to “Our Campus” story and the introduction of Michigan GeoFilters. We implemented a crowdsourced campaign to find the best designs, which resulted in  4 new filters on the platform showcasing different elements of the UMich and greater Ann Arbor community. We are continually excited to see our fans snap us, using the filters, as well as share positive feedback about the filters on other channels.

In the past, especially during our “Dress That Squirrel” campaign, we’ve seen great success with interactive snap stories. Typically, our own story will include a CTA, such as ‘screen-shot the next image’ and perform X challenge, followed by encouraging users to chat us the results for a chance to be featured. These types of stories rarely feature prizes or giveaways because we’ve found that our Snapchat audience doesn’t necessarily need to be incentivized to participate–it’s fun and easy.

When the Travelocity Roaming Gnome made its way to Ann Arbor for Michigan Basketball game day, Snapchat was a unique platform to not only promote his presence on campus, but tie in another interactive campaign:

The new year typically means a fresh start. We’re taking what we learned in 2014 and plan to improve the content, increase engagement, and bring better social activations to the university in 2015. Thanks for following along, and continue to #StaySocial with us this upcoming year!