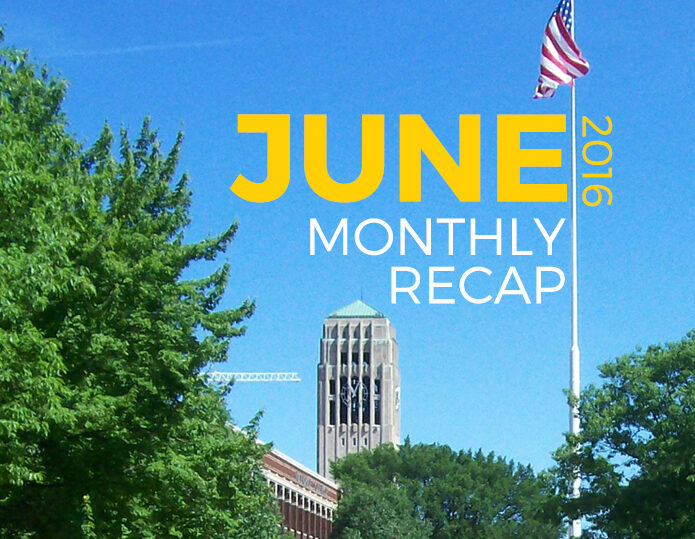 Summer is here, but the campus is still buzzing with activity, and so is UMSocial. In June, we continued to feature the people and places around campus that help makes U-M a top university —and there was plenty to cover.

On June 12, in what has been deemed the deadliest mass shooting in U.S. History, 49 people were killed and 53 injured at the Pulse nightclub in Orlando. We joined with the world in mourning the loss of life and in standing with pride and #OrlandoStrong. As U-M president Mark Schlissel said, “We all share the pain of terrorism motivated by hate.”

This month, as millions around the world took part in Ramadan, we wished our readers a “Ramadan Mubarak” (blessed and generous Ramadan). The post ended up having a reach of 405,244, with 89,000 views, 4,300 reactions, and 158 comments.

This post garnered mixed reactions from some readers who were perhaps unaware of our past posts wishing other religious groups “happy holidays” on Hanukkah, Kwanzaa, Easter, Holi, among others. The U-M community is varied and diverse, and we’re proud to represent ALL our Wolverines.

The #WolverineSummer posts continue to come in this month as summer break continues. Wolverines share their photos of the Great Pyramids of Giza, Machu Picchu, and Stonehenge, to name just a few destinations.  Keep sharing your stories with us this #WolverineSummer.

Summer in the midwest also brings some interesting weather. During one June thunderstorm, user Josh Albee caught this stunning image of lighting over the Big House, which ended up being our best- performing Instagram post this year to date, with nearly 7,000 likes and 70 comments. The Big House is, indeed, always lit.

On June 10, we partnered with Innovate Blue to broadcast the perspectives of successful student entrepreneurs from across campus and around the world for an inspiring #UMichChat. Panelists included Tommy Wilbur, a rising sophomore in the College of Engineering, participating in CFE’s first entrepreneurship study abroad program in Singapore (@twilburUM); Joseph Saginaw, an engineering student who’s part of the inaugural Entrepreneurs Leadership Program, currently interning at Detroit Bikes in Detroit  (@joesaginawUofM); David Cai, a member of the Gaudium team and runner-up in the Michigan Business Challenge competition (@DavidCai_); and Laura Murphy, rising senior and co-founder and chief engineer at ADAPT, LLC (@lr_murphy). The chat eventually garnered 650 engagements and achieved a reach of 211,850 over 205 total posts, ending up with more than 5 million impressions and trending regionally. Read more about the chat here, and follow along with the entire conversation here on Storify!

At the Center for Digital Education and Innovation, fellowships are available in five different areas for both undergraduate and graduate students. Apply for a fellowship for Fall 2016!

Ready to get oriented? UMSocial takes you through all three days of new student orientation. From singing the fight song to walking through the fountain, experience orientation for the first (or second!) time.

This month we introduced a new member to our Navigating the Maize team: Try Gal Aerielle! Aerielle explores the roles of the various members of the U-M Solar Car team, from the classroom to the track.

Thanks for following along with us this month, and keep an eye out for more exciting content coming in July. Stay social and, as always, #GoBlue.