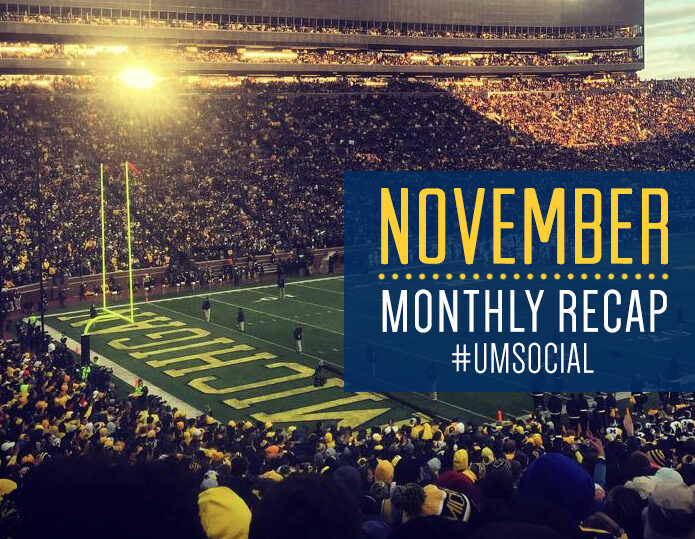 It’s hard to believe that the Thanksgiving holidays are over and December is already here. As we approach the end of 2015, it’s time to once again reflect on the successes of the past months. From the anniversary of our #UMichChat Twitter series to reporting on the first snowfall of the year, our team worked diligently to keep our coverage fresh, while creating innovative new ways to engage with followers. Here’s a recap of our favorite November moments:

We posted content for Veterans Day on all our channels, but we paid special attention to the holiday on Facebook by featuring Ron Warhurst—a former U-M track coach and recipient of two Purple Hearts and a Navy Commendation Medal for service in Vietnam,—on Wolverines of Ann Arbor. In brief yet poignant responses, he reflected on the camaraderie among his company members, the haunting realities of PTSD, and the importance of medical treatment for veterans. This post reached more than 160,000 people and received dozens of comments thanking Warhurst for his service. Many commenters shared bits of their own personal stories, reflecting on their own or their loved ones’ experiences serving in the military.

Every #ThrowbackThursday, we share facts about U-M’s history and traditions on Facebook. In November, we used this feature to promote the newly digitized archive of the Michigan Daily at the Bentley Historical Library. This post received considerable traction, reaching an audience of more than 100,000 people. This ongoing collaboration between the Daily, the Bentley, and UMSocial will continue to showcase the tradition of academic, athletic, and philanthropic excellence that U-M is known for.

Our top performing Facebook post was our Thanksgiving Day graphic, which had an estimated reach of nearly 670,000 people.

November 6 marked the one-year anniversary of our highly successful #UMichChat campaign. This month, we teamed up with the Office of University Development to start a conversation promoting #GivingBlueday, in preparation for the main event on December 1. We hosted a panel of students, faculty, and staff, which comprised Katherine Kowalski, the Office of University Development’s associate marketing director; Michael Reed, U-M alum and account manager at Olapic, a digital agency in New York; and Madison Graver and Ashley Howard, social media coordinator and staff assistant, respectively, in the Michigan Marching Band. Each of our panelists was able to add a unique perspective to the conversation. Together, their voices told a powerful story about the impact of donor generosity and why the world needs Victors.

The first-ever U-M Diversity Summit took place November 4–12. The event was a weeklong exploration of U-M’s commitment to increasing and enhancing diversity, equity and inclusion on campus. Our team provided comprehensive coverage of the summit, live-tweeting several community dialogues using the hashtag #UMichTalks. To help our audience follow the conversation, we encouraged everyone who was live-tweeting the summit to adopt the hashtag as well, Our efforts certainly paid off: during the week of the summit, our hashtag was used nearly 2,000 times by 499 unique users, generating 15 million impressions. We’re proud that we could use our social channels to spread these crucial messages and contribute to the summit’s success.

This month we diversified our content to highlight different areas of campus, including academics, athletics, the arts, and student life. Seasonal content, including photos documenting the first snowfall of the season and our Thanksgiving Day motion graphic, performed well.

Additionally, we collaborated with two different departments for weeklong Instagram “takeovers.” When a department takes over our Instagram [feed , they provide a week’s worth of photos and captions to tell a story and spread their message to our audience. From November 9–14, we partnered with the Ginsberg Center, who used their takeover time to promote their #IAmSocialChange campaign. These posts featured students who are involved with Ginsberg Center programs like America Reads and Alternative Spring Break. These students told their stories, articulated what social change means to them, and explained how their involvement with the Ginsberg Center has allowed them to contribute to the community.

During the week of Thanksgiving, we teamed up with the Office of University Development to promote Giving Blueday. They chose Stephanie Madigan, U-M junior and member of the Forever Go Blue advisory board, to be their Instagram ambassador. Stephanie’s photos told an emotional story about her personal connection to U-M, and how her family’s long history with the university has encouraged her to give back. She also shared stories of the impact of past donations, and told followers how they can get more involved with Giving Blueday and the Victors for Michigan campaign.

Our top performing Instagram photo was this sunset shot from the gates of The Big House. This photo received 7820 likes and more than 100 comments.

On Snapchat, November was full of exciting growth and promising engagement. We exceeded 10,000 followers, effectively doubling our audience since January 2015.  As our number of followers increases, so does the average number of views and screenshots that our stories recieve.We’re expecting this this growth to continue into 2016 and are excited to expand our account’s reach across campus.

From the Diag for LSA’s annual squirrel-themed scavenger hunt, to backstage at MUSKET’s performance of Spring Awakening, to the sidelines of the Big House at the OSU vs. Michigan game, our Snapchat brought campus events to people who weren’t able to attend in person. In addition, we were able to utilize Snapchat to showcase these events from multiple points of view, resulting in visceral, authentic storytelling.

We continued using Snapchat to highlight academic research by teaming up with the social media team at the College of Literature, Science, and the Arts to create a story about, well, Snapchat! This story ga a study from the communications department that explored sutdent’s social and emotional experiences on Snapchat and Facebook. The study suggested that Snapchat interactions are perceived as more enjoyable than associated with a more positive mood than other communication technologies. Our audience clearly agreed: the story received 4.7K views in its 24-hour lifespan.

Time flies when you’re having fun, and we can’t wait to see what the rest of 2016 has in store. #GoBlue and #StaySocial!