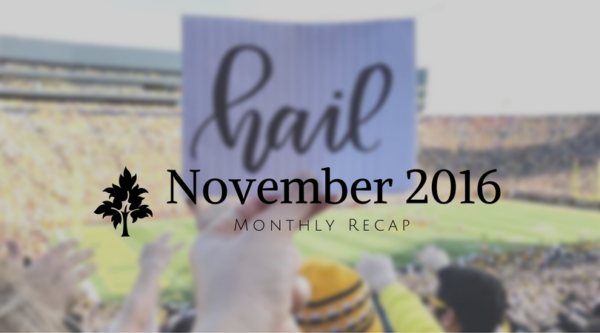 The Thanksgiving holidays are over, and the end of the Fall 2016 semester is in sight. As November comes to a close, it’s time to take a look back and reflect on our top-performing content, assessing our audience’s engagement on a platform-by-platform basis and using those findings to inform future strategy. A recap of the highlights from November 2016:

On November 18, we held our second Facebook Live #UMichChat. UMSocial hosted a panel of students and staff who discussed “Giving Blueday,”  the University of Michigan’s take on the national “Giving Tuesday” initiative, which happens every year on the Tuesday after Thanksgiving. We partnered with the Office of University Development to bring together a group of participants who spoke about many facets of #GivingBlueday: what it is, why it’s important, and how donor gifts make a meaningful impact. 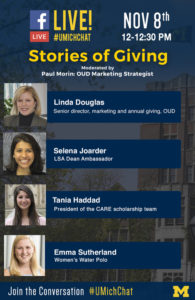 The half-hour livestream received 11,230 video views and 313 engagements from distinct users. In the days following the chat, the video reached an estimated social audience of 75,112 people.

If you missed it live, you can view it here

This month saw a considerable increase in the overall reach and audience engagement of our Facebook posts. Our Facebook posts had an average reach-per-post of 213,829 people, with posts reaching an average of 28 percent of our followers. This is a notable increase from last month, when our average post reached only about 16 percent of our followers. Additionally, our Facebook posts generated a significantly larger amount of engagement when compared to previous months: in November, posts generated 145,078 reactions, comments, and shares. This is nearly four times greater than last month’s total engagement, which totaled 37, 527 likes, comments, and shares.

The increase in engagement was due largely in part to this post, where we challenged our followers to like, comment, and share the photo to help the University of Michigan Health System beat the Ohio State rescue helicopter team, Medflight in an “Air Battle.” 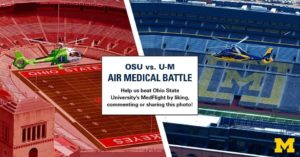 All Wolverines hold these truths to be self-evident: 1. The best afternoons are spent in the Big House, and 2. Michigan weather is a hilariously unpredictable creature. The Indiana vs. Michigan home football game on 11/19 was a perfect example. Fans basked in the sun during the first quarter, only to be greeted by the first snow of the year after halftime. One of our Instagram followers, @acoffeeandacamera, captured this stark contrast perfectly, so we reposted her image to our account: 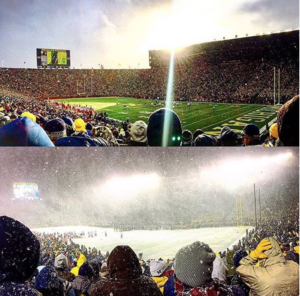 For the past two years, UMSocial has partnered with the Office of University Development to help spread the word about Giving Blueday, U-M’s annual day of giving. This year, Giving Blueday took place on Tuesday, November 29. 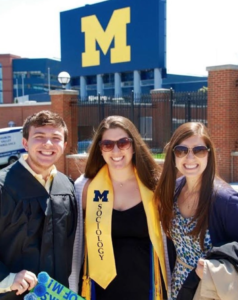 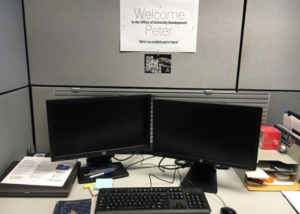 For the second year in a row, OUD selected a student ambassador to take over our Instagram for a week leading up to the event. This year’s ambassador was Peter Lucido, a U-M sophomore and Online Engagement Assistant at the Office of University Development. Peter provided a week’s worth of content, sharing his passion for U-M and explaining why giving back is such an integral part of his student experience:

Overall, Giving Blueday was a huge success: more than 7,000 donors raised over $5 million to support university departments and student organizations. We’re so happy that we could contribute to the development team’s efforts and help them achieve their goal.

Another high-performing piece of content this month was our Thanksgiving Day “cinemagraph.” A descendent of traditional gif animation, the cinemagraph combines still photography and videography to create subtle motion and add a lifelike element to an image. In the past, cinemagraph-style content (such as our Valentine’s Day post earlier this year) has performed well with our audience, and this Thanksgiving post was no exception. By the end of the day, the cinemagraph had received more than 13,000 views.

We gained more than 4,500 new followers in November 2016, and our posts received a total of 167,027 likes and comments—35,000+ more than they received last month. Currently, we are the third-highest-ranked university on Instagram, with only Stanford and Harvard surpassing our follower count.

On November 16, the U-M’s Ford School of Public Policy hosted a daylong symposium,  “50 years of Civil Rights Activism,” in honor of noted activist Reverend Jesse Jackson. The event was held at Rackham Graduate School and consisted of a series of panels and dialogues about the future of activism. We live-tweeted Jackson’s keynote address as part of our #UMichTalks lecture series, enabling our audience to hear Jackson even if they couldn’t attend the event in person. The highest-performing tweet from the series received more than 16,000 impressions and 130 favorites.

In November, both audience growth and engagement were consistent with what we have seen in recent months. In total, or Tweets generated a total of 1,808,353 impressions, averaging 16,003 impressions per post. There has been a consistent upward growth trend on our account since the beginning of the year, and we anticipate this pattern continuing on into 2017.

In mid-November, the student musical theatre company MUSKET reached out to UMSocial and asked for our help in promoting their Fall 2016 production of Avenue Q,  a Tony Award-winning musical written by U-M alum Jeff Marx. This show is a hilarious musical comedy that imagines our favorite childhood characters from The Muppets and Sesame Street in adult situations. We teamed up with MUSKET’s marketing team and several members of the cast to give our followers a look at the final dress rehearsal and other behind-the-scenes glimpses of the show. Actors acted as tour guides and shared information about the production, the venue, and how people could get tickets. This short, backstage look was both whimsical and informative, helping MUSKET increase their audience and disseminate their event information to new people.

On November 22, we created a Snapchat story in partnership with the U-M’s Department of Public Safety and Security (DPSS), and shared tips for students to help them prevent bicycle theft. DPSS officers talked about how students can keep their bikes safe and explained how to register bikes with the police. This story delivered an important message in an approachable and entertaining manner,  and the proof was in its reach and audience retention. At its peak, the story was viewed an audience of 5.4k people.

That’s it for November! Thanks for following along—and, as always, #GoBlue and #StaySocial.