Sorry, Snap. Our Streak May Be Over. 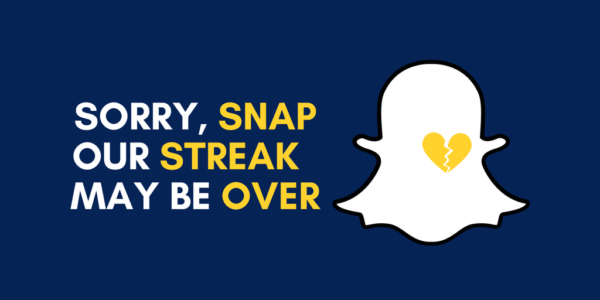 Breakups are hard. We’ve all gone through them, driving ourselves crazy second-guessing our decision and wondering if we’re really doing the right thing. Would breaking up with Snapchat be as difficult? That’s the question we’re asking ourselves today.

Snapchat launched in 2011 and as it gained popularity, UMSocial saw an opportunity to use the platform in an innovative way by integrating it into a higher ed social tool to reach students. We were the first social media account in higher ed to implement it into our social strategy; many other institutions followed suit after witnessing its success and seeing the impact it had on reaching prospective and current students. All signs pointed toward Snapchat being a dynamite social media tool, and it was (keyword being was).

Social media is for sharing, and when celebrities and other public figures share their thoughts, people notice. The impact social media influencers have on brand loyalty is not slowing down, and recently, some of those famous users have had a lot to say about Snapchat.

The social-media opinions of celebs like Chrissy Teigan and Kylie Jenner can actually have real-world effects. A few weeks ago, Jenner wrote (in a tweet that was RT’d 76,000 times and liked by 374,000 accounts (Gosselin, 2018)): “Sooo does anyone else not open Snapchat anymore? Or is it just me…ugh this is so sad.” After Jenner’s tweet, Snapchat’s stock plummeted 6%, wiping out about $1.3 billion of the company’s market value (Yurieff, 2018).

Teigan also voiced her opinion after a sponsor bought ad space and ran an ad that poked fun at domestic violence, referencing Rihanna and Chris Brown, and included a “Would You Rather” question in between Snapchat’s featured stories on their “Discover Page.”

“The whole thing is an absolute mess,” said Scott Levy, CEO of social media agency Fuel Online, noting that his firm generally advises clients not to spend resources on Snapchat. “People are not using it any more. On top of the lack of use, you’re getting public celebrity backlash” (Levin, 2018). The number of influencers slamming the app keeps growing, and the erosion of Snapchat’s user base may be growing with it.

You’re Not You Anymore

One of the biggest complaints about text messaging is that it’s hard to accurately convey emotion. Snapchat resolved this problem by providing users a way to easily send video and photo content to each other. Snapchat lived somewhere between a messaging app and Facetime, allowing users to send photos and videos without clogging up their device’s memory with an array of selfies or video clips.

Unfortunately, Snapchat seems to have forgotten its original charm, recently releasing a messy update that has littered the application with ads, space for paid branded content, and forcing all of the social interactions in the application to one small corner.

Originally intended to separate friends from brands, the Discover Page made it easier to keep up with the former while still giving the latter visibility (Newton, 2018). The redesigned page incorporates both chat messages and ephemeral stories and pushes items from your close friends to the top of the feed. But users have expressed complaints about it feeling disorganized and difficult to navigate.

You’re Just Not The One

Snapchat’s ability to help brands measure the success of their stories and posts is basically nonexistent. Their analytics provide only the bare minimum which would have been fine for basic use of the app, but not for brands. Analytics are absolutely critical: they are our “performance reviews” they’re key in letting us know if our social strategy is working.

The University of Michigan is not the only higher ed institution that wants more robust analytics data. Snapchat was a large part of University of Wisconsin-Green Bay’s social media strategy,  and while it continues to be used, the fact that it doesn’t offer archived analytics has increasingly become an issue. Jena Richter-Landers, Wisconsin-Green Bay’s social media strategist, explains: “After seeing a drastic drop in reach after recent changes to the platform’s delivery of stories, we’ve moved some of the content that we had been putting out on Snapchat Stories to Instagram Stories to receive higher return on investment and more easily measured metrics” (Landers, 2018).

You’re Holding Me Back

In a way, we shouldn’t be surprised by Snapchat’s complacency in this relationship. The platform hasn’t tried to expand its functionality or update its look and feel until quite recently, and its one attempt to do so didn’t appeal to users. More than 560,000 people have signed a change.org petition calling for Snap to “Remove the new Snapchat update,” saying many ‘new features’ are useless (Spangler, 2018).

Whereas Snapchat’s recent updates have led to a lot of negative feedback, Instagram’s stories feature has grown in popularity, functionality, and reputation. We post on social media to develop our own personal brand.  We want our followers to see our content. Would you rather show your four best friends the cool drink you got at that new restaurant on Snapchat, or use Instagram stories to tag the restaurant, show all your followers, and everyone scrolling through the Discovery page? If Snapchat is for friends, Instagram is for the world, brands have begun to recognize that shift and are adapting to capture their audiences’ attention.

Colorado State University, which adopted Snapchat into its content strategy early on like UMSocial, has recently started questioned the value of the platform. “The app is still nowhere near enough,” says Jen Smith, Assistant Director of Social Media at CSU. With more and more questions arising about how valuable the app is, higher ed institutions are moving toward investing more of our time and energy into Instagram and other platforms (Smith, 2018).

We’ve been with Snapchat for a while now. And as in any long-term relationship, you should first try to fix problems before throwing in the towel, right? So we try to accentuate the positive, and one thing Snapchat has going for it, its intimacy. Snapchat is for close friends, and that personal sense is something other social platforms don’t do as well.  We’ve worked to personalize our Snapchat content to make it work, despite all our issues. And as higher ed social media professionals work together to make their platforms the best they can be, CSU has recognized this lasting quality, as well. “Because CSU’s Snapchat account has been around for a while, we have a large audience (just like UMSocial) and appreciate our connection with that community” (Smith, 2018).

When planning social media campaigns, we try to look for reliable and effective platforms that will reach our target audiences. Snapchat has helped us creatively connect with students in the past, but moving forward, its usefulness may be limited. Snapchat: don’t call us, we’ll call you.

Angulo, Ingrid. (2018). Here’s why Snapchat users are so upset about its recent redesign. CNBC.

Gosselin, Jordan. (2018). What does Snapchat’s update mean for its future? Media Bullseye.

Newton, Casey. (2017). Snapchat introduces a redesigned app that separates your friends from brands. The Verge.