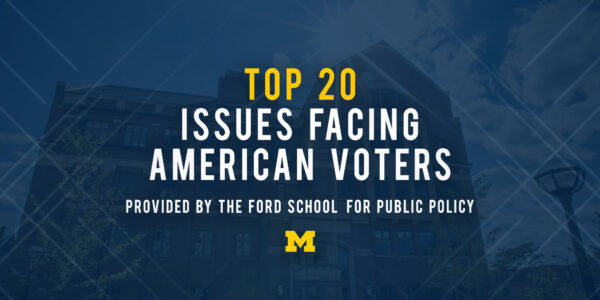 This list comprises, in no particular order, the topics on the mind of faculty, staff, and students as we finish up 2019 and head into a new decade and the 2020 elections. Many experts at Gerald R. Ford School of Public Policy experts weighed in on these topics this year.

Michigan leaders worried about possible effects of next recession
“While no one knows when the next recession will hit or how bad it will be, the economic growth clock is ticking.” – Thomas Ivacko, associate director of the Center for Local, State, and Urban Policy

Stevenson debunks five myths about the Fed in Washington Post
“When we look at the data, we are not seeing how inflation and unemployment move in response to market forces; instead, we are seeing the Fed actively trying to keep inflation near its 2 percent target. So the relationship now reflects the Fed either undershooting or overshooting its rate.”  – Betsey Stevenson, professor of public policy; professor of economics

“Rich people are happier than poor people, and that’s true all the way along economic distribution.” – Justin Wolfers, professor of public policy; professor of economics

Wolfers’ take on Trump’s tariffs
“The United States is still less protectionist than it has been throughout most of its history or than most nations are today.” – Justin Wolfers, professor of public policy; professor of economics

Democratic presidential candidates’ climate change proposals may be unrealistic, says Rabe
“What this would look like, and how this would work, probably hasn’t been talked about at the dinner table in most communities. What we don’t know is whether the nominee will stay the course and keep the plan, or hedge and dial back.” – Barry Rabe, Ira and Nicki Harris Family Professor of Public Policy; Arthur F. Thurnau Professor; professor of environmental policy; professor of political science; professor of the environment

Utilities have little financial incentive to plug methane leaks
“The overwhelming lesson we’ve taken from doing this research is that the price regulations we’ve relied on in the natural gas distribution sector are out of date, given our current understanding of methane’s role in climate change.” – Catherine Hausman, assistant professor of public policy

Sarah Mills work featured on This is Michigan
“Wind turbines fit better in some communities than others. It depends on what their development goals are.” – Sarah Mills, senior project manager at the Center for Local, State, and Urban Policy

Parthasarathy talks algorithms place in the criminal justice system
“Technology is not neutral. Even when we think about how data is collected and stored and how we measure things, even that in and of itself has a bias.” – Shobita Parthasarathy, professor and director of the Science, Technology and Public Policy Program

Ford’s Robert Hampshire forecasts the future of autonomous vehicles
Given the approximation that “autonomous vehicles averaged one disengagement [emergency scenario] every 5,000 miles…you’d need around 50,000 to 100,000 employees, distributed city by city. A network like that could operate as a subscription service, or it could be a government entity, similar to today’s air traffic control system.” – Robert Hampshire, associate professor of public policy and a research associate professor in both the U-M Transportation Research Institute’s (UMTRI) Human Factors group and Michigan Institute for Data Science (MIDAS)

Axelrod talks “don’t fall into the zero-sum trap” and other lessons on podcast
“The biggest lesson for me is don’t fall into the zero-sum trap. Whenever we think of things as a rivalry or a competition, we tend to immediately fall into the simple-minded thinking that it’s a zero-sum game…it’s usually opportunities that are mutually advantageous that are overlooked if you take that approach.” – Robert Axelrod, member of the National Academy of Sciences and former MacArthur Prize Fellow,  Walgreen Professor for the Study of Human Understanding at the University of Michigan. Axelrod has appointments in the Department of Political Science and the Gerald R. Ford School of Public Policy.

Lowering national debt is as easy as 1, 2, $4.95 billion!
“The longer we wait to do so, the more burden the current generation will have to take on compared to the baby boomer generation.” – Tyler Evilsizer, Deputy Policy Director for the Committee for a Responsible Federal Budget (CRFB) and guest speaker at the Gerald R. Ford School of Public Policy

Withdrawing from the Flores Agreement could keep immigration lawyers in dark, Vieux says
“We’re going to see a lot more people detained for longer periods of time in facilities that are not licensed, and significant physical- and mental-health ramifications for the children that we serve.” – Hardy Vieux (MPP/JD ’97), Towsley Policymaker in Residence at the Gerald R. Ford School of Public Policy and vice president, legal at Human Rights First

Iovan and Lantz discuss their latest research on super-utilizers
“There are two major reasons behind the drive to reduce emergency care use. First, the emergency department is not the best place to receive primary care. Super-utilizers use the ED for a number of reasons other than having a medical emergency.” – Paula Lantz, associate dean for Academic Affairs; professor of Public Policy, James B. Hudak Professor of Health Policy

“Many studies of super-utilizers find that health care use and costs go down the year after the intervention. However, a big problem is that we see this even without an intervention. This is in part because the people in the ‘super-utilizer’ group change somewhat from year to year.”- Samantha Iovan, staff at the Gerald R. Ford School of Public Policy

“We really want to stress the importance of conducting more high-quality evaluation research in this area. These patients certainly have many medical and social needs that have to be addressed, but the current research literature does not provide the evidence to support claims that super-utilizer interventions that are spreading across health care systems are actual working.” – Mahshid Abir, Department of Emergency Medicine at U-M Medical School

Shaefer warns of Medicaid work requirement risks
“This should include the highest-quality experimental or quasi-experimental testing of employment, health outcomes and economic impact. Doing so would set Michigan apart in its commitment to really understanding the full impact of work requirements.” – H. Luke Shaefer, PhD, director of Poverty Solutions at U-M, and associate professor at the University of Michigan, School of Social Work, and Gerald R. Ford School of Public Policy and Marianne Udow-Phillips, executive director of the Center for Health and Research Transformation

Ivacko discusses opioid interventions on Michigan Radio
“If they don’t have someone to turn to or a helping hand in these difficult times, it’s just that much harder for them to try to take a step forward.” – Thomas Ivacko, associate director of the Center for Local, State, and Urban Policy

Levitsky warns of consequences from marijuana legalization in Michigan
“Keeping marijuana products away from vulnerable youth will require more vigilance and state and local intervention than when marijuana was banned.” – Melvyn Levitsky, professor of international policy and practice at the Ford School, and Kevin Sabet, president of Smart Approaches to Marijuana (SAM)

Ivacko makes sense of the recreational marijuana ‘haze’
If a chief of police or county sheriff feels it’s important to follow federal law, and a county administrator or a city mayor feels it’s important to follow state law, well, that’s a tough place to be for public officials. And so, opting out, you know, is a way to avoid those kinds of challenges.” – Thomas Ivacko, associate director of the Center for Local, State, and Urban Policy

Ali proposes a commission to fight domestic terror
“Our country still faces the possibility of additional attacks that will raise the same questions about why the government is not doing more to stop the violence.” – Javed Ali, a Towsley Policymaker in Residence at the University of Michigan’s Gerald R. Ford School of Public Policy, and Josh Kirshner, former special assistant to the Under Secretary of State for Arms Control and International Security

Scott Atran et al look at cognitive triggers for extremist violence through brain scans
“In this new effort, we sought to learn more about what goes on in the minds of people who have expressed a willingness to die for a cause that is based on sacred values—in this case, sympathizers of an Al-Qaeda associate called Lashkar-et Taiba.” – Scott Atran, adjunct research professor

Pilkauskas finds Earned Income Tax Credit helps low-income moms live on their own
“The rule of thumb is that it is generally good to pay less than 30% of your income in rent—but in our study, half of mothers paid more than 50% of their earnings on rent. Increasing the EITC by $1,000 reduced severe housing cost burdens by 5 percentage points.” – Natasha Pilkaukas, assistant professor of public policy

Poverty Solutions & CLOSUP new report find local officials believe many Michigan residents struggle to make ends meet
“Economic recovery across Michigan in the wake of the Great Recession has been uneven.  Despite a very low unemployment rate, this survey finds poverty and economic hardship are widespread and common challenges exist in all kinds of communities.” – Tom Ivacko, associate director of the Center for Local, State, and Urban Policy

Natasha Pilkaukas’ research on three-generation household receives Michigan Minds spotlight
“I’m really interested in thinking about what we can do to help children thrive. Who is in the household matters for kids.” – Natasha Pilkaukas, assistant professor of public policy

Dynarski’s work on school day SAT testing cited in Inside Higher Ed analysis of the 2019 test results
“Universal testing alone will not get disadvantaged students into college. But it produces small, discernible increases in college attendance, especially at four-year colleges.” – Susan Dynarski, a professor of public policy, education and economics

Seefeldt offers insight on student debt trends on Michigan Radio
“So while [these students] may be qualifying for financial aid, financial aid has not kept pace with rising college costs. So you have students who have more need, but the types of grants and aid we can give them is just not there.” – Kristin Seefeldt, professor of public policy and social work

Jason Owen-Smith warns of “serious risks” when universities cater to an industry
“I think a narrow focus that closely aligns university work with near-term business needs is perilous.” – Jason Owen-Smith, professor of sociology and public policy

Hampshire receives National Science Foundation Convergence Accelerator grant
Robert Hampshire, associate professor of public policy at the Ford School and associate research professor at Michigan Institute for Data Science (MIDAS), was awarded a $948,182 grant by the National Science Foundation’s Convergence Accelerator (C-Accel) to study how all Americans’ quality of life and economic prosperity can be improved by recent transportation innovations like ridesourcing and driverless vehicles.

Leiser and Mills contribute to resources for new Michigan Lead and Copper Rule
“As part of a project led by the University of Michigan’s Water Center and funded by the C.S. Mott Foundation, we have explored some of the challenges associated with financing LSL replacement under the revised Lead and Copper Rule.” – Sarah Mills, senior project manager at the Ford School’s Center for Local, State, and Urban Policy (CLOSUP) and Stephanie Leiser, lecturer at the Gerald R. Ford School of Public Policy

Who makes the call? Thacher and Gillooly advocate for 911 operator training
“There is a lot of ambiguity on the part of callers, and it would rarely be appropriate to criminally punish them, because there are just so many judgment calls.” – David Thacher, associate professor of public policy and urban planning

“Operators need agency support to train them on how to handle such callers, and protocols about when calls can be appropriately rejected so as to reduce operators’ liability.” – Jessica Gillooly, PhD student

Yusuf Neggers discusses latest research with VoxDev
“We might think that these information constraints are particularly important in rural areas where you have lower literacy rates and probably lower penetration from radio, television, newspapers, that might otherwise provide information.” – Yusuf Neggers, an assistant professor of public policy