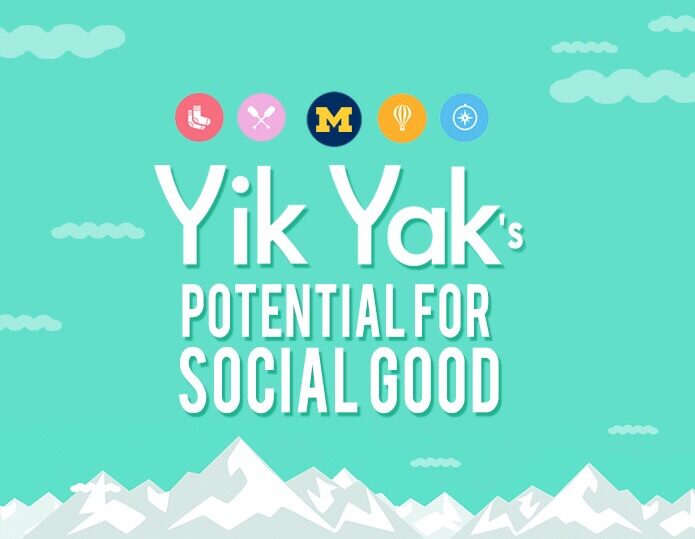 Here at UMSocial, we spend a lot of time reading tweets, scrolling through Instagram, viewing “snaps” and navigating Facebook posts. We see the good, the bad, and the just plain ugly of the internet. Last spring, we added yet another platform to our purview when it became apparent that we must seriously start considering an emerging online community known as Yik Yak. When it was first brought to our attention, Yik Yak seemed like it embodied it’s mascot’s characteristics: big and hairy. Now, with a presence that encompasses over 1,600 venues and boasts millions of monthly active users, the app is taking over college campuses one by one, and we are seeing more and more UMich students jumping on to “ride the Yak.”

Since our initial review of Yik Yak, the platform has experienced some very public growing pains. Following concerns from parents, students, and school officials regarding cyberbullying, the app team worked to “geo-fence” or block access to the platform in geographic locations that contained K-12 schools throughout the United States.  Our state specifically has not been immune to anonymity app-induced scandals either. To our west, a Yik Yak-based gun threat resulted in criminal charges at Michigan State University, and to our east, raised questions of freedom of speech and harassment issues at Eastern Michigan University.

In March, U-M Director of Social Media, Nikki Sunstrum, had the opportunity to hear from Yik Yak co-founders Brooks Buffington and Tyler Droll about the strategic direction of the network and to discuss the real-life implementation we are seeing at UMich. The insights were pertinent as the app’s popularity and press on its power to enable bullying, harassment, and threats, also garnered the attention of Cynthia Canty, host of Michigan Radio’s “Stateside.” Listen to the full interview here.

Like the questions UMSocial received regarding the misguided perception of Snapchat when we first launched our branded presence over a year ago, the majority of our inquires regarding Yik Yak are focused on negative usage. However, we view it as problematic when the focus is placed solely on the dark-side of social media’s impact on our culture and society. At UMSocial, we are dedicated to facilitating an understanding that the power we possess as users is imperative to building positive online communities. Therefore, last fall, with our first blog post we challenged our students to change the tone on Yik Yak. Since then, it has been read by over 2,400 people. However, it’s time we added a little more to the story.

Recently at TEDxUofM School of Information Professor Cliff Lampe gave a compelling talk articulating the personal ownership of our online use. As he explained, “Social media is a blank canvas and it’s we are painting. If you don’t like what’s on social media, I challenge you to change what you put on social media.” It is easy to find ourselves caught up in only considering the damage of social media to society; more difficult to step back and realize that it is us, and the people around us, who are responsible both for the toxicity and for changing the tone.

When Yik Yak’s Campus Tour bus rolled into Ann Arbor unannounced on April 14th, they too were touting the power of the application and the responsibility of college communities to make a difference. “The mission of the tour is to encourage students to positively contribute to their feed, as well as to educate them about the ways in which they can facilitate and be conducive to the health of their community,” said Field Marketing Associate Sean Maher. “We encourage users to stand up and treat the feed the same way they treat their community, and to down-vote or report negative or hurtful posts and comments if they appear. Just as you would not throw trash on the ground, you should not litter your feed either.”

Rather than judging Yik Yak based only on bad press, we dug in and discovered how its features instead provide an opportunity. Due to its geo-fenced reach and anonymous nature, Yik Yak enables everyone to have a voice without fear or embarrassment. This sets it apart from all other networks and allows individuals to facilitate meaningful discussions and enable diverse perspectives. As the app becomes more widely adopted, this dialogue not only crosses political affiliations, ethnicities, and genders, but also has the potential to bridge generational divides.

Yik Yak also provides an innovative support system. Students struggling with everyday issues, depression, or insecurities regularly post or reach out for help on the app. As a true testament to the UMich community, these individuals are quickly met with words of support, encouragement, and suggestions for campus resources such as CAPS. Furthermore, we often see users step forward and give similar testimonials as a means of helping others to not feel alone in their struggles. It is the anonymity that Yik Yak offers that allows users to speak out and gain such life-changing support from their peers.

Others on campus have also taken notice of Yik Yak’s potential. PULSE — a campus student group whose members serve as health, wellness, and social justice advocates — has seen many members reach out via Yik Yak as an extension of their traditional efforts. Dedicated to having their “finger on the pulse” of campus, they are a perfect liaison between students and campus wellness resources. Member Coordinator Elena Rosenberg-Carlson manages weekly activity and members’ recorded peer interactions. Elena increasingly sees members log their Yik Yak outreach to users posting about depression and self-harm. Rather than designing strategies on how to engage with peers specifically on Yik Yak, Elena says PULSE’s training instead instills confidence, encouraging their members to speak up, and that interactions such as this happen organically. She also points out that Yik Yak’s geo-fence is particularly useful because they’re able to refer very specific resources. By leveraging groups and mechanisms already in place, PULSE is able to focus its efforts on one of their key goals of harnessing social media to shift the culture toward a more health and socially conscious community.

Just yesterday, here at UMich we experienced a cry for help and witnessed the great potential Yik Yak has to better the community and save lives. After an unidentified student posted on Yik Yak that they were going to end their life on April 30th, the community and official campus resources quickly came together to offer overwhelming support and suggestions for available resources.

The original poster, referred to as “4/30” received words of encouragement:

Reminders of hope and resources:

It wasn’t long before an in-person rally was organized within the app.

Then, in collaboration with UMSocial, the Dean of Students, University Public Affairs, and the Department of Public Safety and Security, UMich offered words of support:

Collectively, this provides an excellent example of how Yik Yak truly is part of a movement. A movement that can change the tone of social media, and move us toward a better understanding of our power online. For this reason and many more, we at UMSocial are partnering with Yik Yak to pledge to use the app and all social media to the best of its ability. Social media in general, and Yik Yak in particular, is a place for discussion, for humor, for support, and a place to connect.

Join us and take the pledge. As a way to thank Wolverines driven to make a difference, all those who take the pledge will get a chance to win Yik Yak merchandise. Together we are stronger and can create #ABrighterBlue!

Editing by @nikkisunstrum, Director of Social Media at the University of Michigan