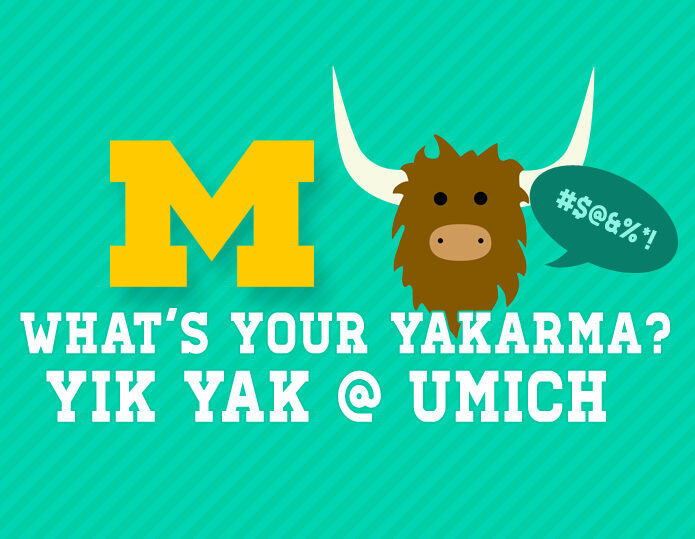 I decided to finish writing this blog post in the quiet of the South Quad 9th floor study area when a group of loud boys disrupted everyone nearby. As I was typing they gossiped loudly about girls in their dorm that they were Facebook stalking. By Yik Yak standards, their embarrassing conversation was perfect material for at least a couple “up-votes”. After returning a few hours later one barged in the room and shouted at me “Did you yak about me?!” Although I did not “yak about them,” I witnessed (in a pretty entertaining way) the enormous reach that Yik Yak has on our campus.

Yik Yak seems to be the latest and greatest social media app that is gaining popularity here on campus. Essentially, Yik Yak is an anonymous, location-based Twitter. Anyone over the age of 17 can sign up and post their thoughts for everyone in the location to read on their feed without being identified. Users can then “up-vote” or “down-vote” different posts in their feed. Posts that are popular are featured as “Hot” and posts that have more than 5 “down-votes” are deleted. Users are enticed to raise their “Yakarma score” by posting popular posts and voting and commenting on other’s posts.

Anonymity is a popular trend in social media. Sites like Ask.fm, Whisper, and Secret are sites that use namelessness as a way to differentiate themselves from traditional social media. Here on campus popular Twitter accounts like @umichcrushes and @umichconfessions post tweets that people submit to the account creator. However unlike these Twitter accounts Yik Yak has no middle-man mediator. Because of this, it’s easy to post things that are offensive and hurtful.

Yik Yak in the News

Run a google-search on “Yik Yak on campus” and you’ll find dozens of articles ranging from bullying concerns to reports of threats being posted on Yik Yak. Anonymity removes accountability and students take advantage. The Yik Yak feed is found to be peppered with racism, sexism, misogyny, and homophobia. There have also been instances of extreme cyber-bullying where people are singled out on the app by being mentioned by first and last name in offensive posts. Students on several high school and college campuses have been arrested after posting violent shooting threats that led to school evacuations. The combination of these threats and bullying has led many middle schools, high schools, and some smaller colleges to ask Yik Yak to create geo-fences, which would prohibit these schools’ students from using the app on their campuses.

Yik Yak has responded to these problems by posting their rules on the app. It’s clear that Yik Yak doesn’t want their app to be associated with bullying, yet they have also stated that they rely primarily on self-policing to provide a more positive Yik Yak community.

UMSocial has been monitoring Yik Yak since early spring to proactively address and stay apprised of the problems found here on campus, and we have definitely discovered some of the same issues as other schools. Because of the size of our campus, there hasn’t been instances of serious bullying mentioning a person using their full name. However there are accounts of offensive content including targeting specific fraternities and sororities on campus. There is also a large amount of misogynistic posts. Generally speaking, vulgar sexually explicit content is often posted, and drug and alcohol references are common. It seems as though students post their thoughts here that are too inappropriate for Twitter. This particular posted summed up the relationship between Yik Yak and Twitter well.

While Yik Yak has a lot of bad publicity and negative content, on the other hand Yik Yak can be a way for students to connect with one another. I personally enjoy Yik Yak. I find myself laughing at the posts that strongly resonate with me as a Michigan student. Most of the jokes wouldn’t be appreciated by a non-wolverine.  From Umich squirrels to sarcastic “Freshmen Tips” strong trends form until a new popular topic is brought up. These trends are short-lived, yet descriptive of who we are as Michigan students. The most popular yaks are clever and timely.

It’s up to us to change the tone of the yaks. Up-vote positive yaks that speak to us as Umich students, down-vote the yaks that can be degrading or hurtful to others, and flag hateful posts. By doing this we shape our common voice in a supportive way. Even though Yik Yak is anonymous, we can still step in to to stop the bullying found on this platform. If you see yaks about abuse or self-harm, suggest our student support resources link: http://studentlife.umich.edu/studentsupport. Our university also has resources such as CAPS, SAPAC, and our 24 hour helpline for those in need of professional help.

Yik Yak can be a way to share the hilarious and absurd thing you saw while studying in the UGLi. It can be the outlet you introduce a difficult issue that’s on your mind. It can be a way to anonymously reach out for support when you need it. Yik Yak is a culture-sharing medium. It’s hilarious and it’s entertaining. It can be distressing or it can be uplifting. It can connect us or tear us apart. Regardless of how you use Yik Yak, these fleeting posts have an impact on us.