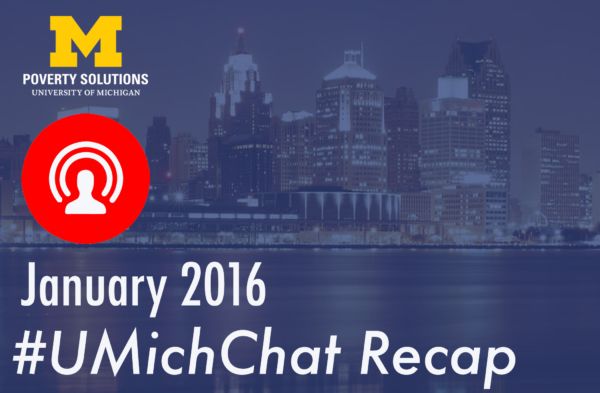 In January 2017, U-M announced new investments in the Poverty Solutions initiative, a series of community/academic research partnerships that aims to test innovative models to ease the effects of poverty.Goals of the investments include developing new strategies to protect and expand affordable housing in Detroit, testing new ways to deliver healthcare services to those living under the poverty line, and developing a “Transportation Security Index” to understand the relationship between transportation insecurity and socioeconomic mobility.

UMSocial and Poverty Solutions brought together a panel of academic leaders and community partners to discuss the new investments. The chat was moderated by Luke Shaefer, director of the Poverty Solutions Initiative and an associate professor at the U-M School of Social Work. Joining Shaefer was U-M President Mark Schlissel, who explained the initiative’s broad vision and the role of the university in developing community-based solutions to ameliorate poverty. The other panelists represented important voices from the initiative’s academic and community partners: Michelle Heiser, professor of internal medicine at the U-M Medical School and member of the Institute for Healthcare Policy and Innovation; Dr. Joneigh S. Khaldun, medical director at the Detroit Health Department; Dave Law, executive director at the Joy-Southfield Community Development Corporation; and Trina Shanks, professor at the U-M School of Social Work and Faculty Associate at the U-M Institute for Social Research. 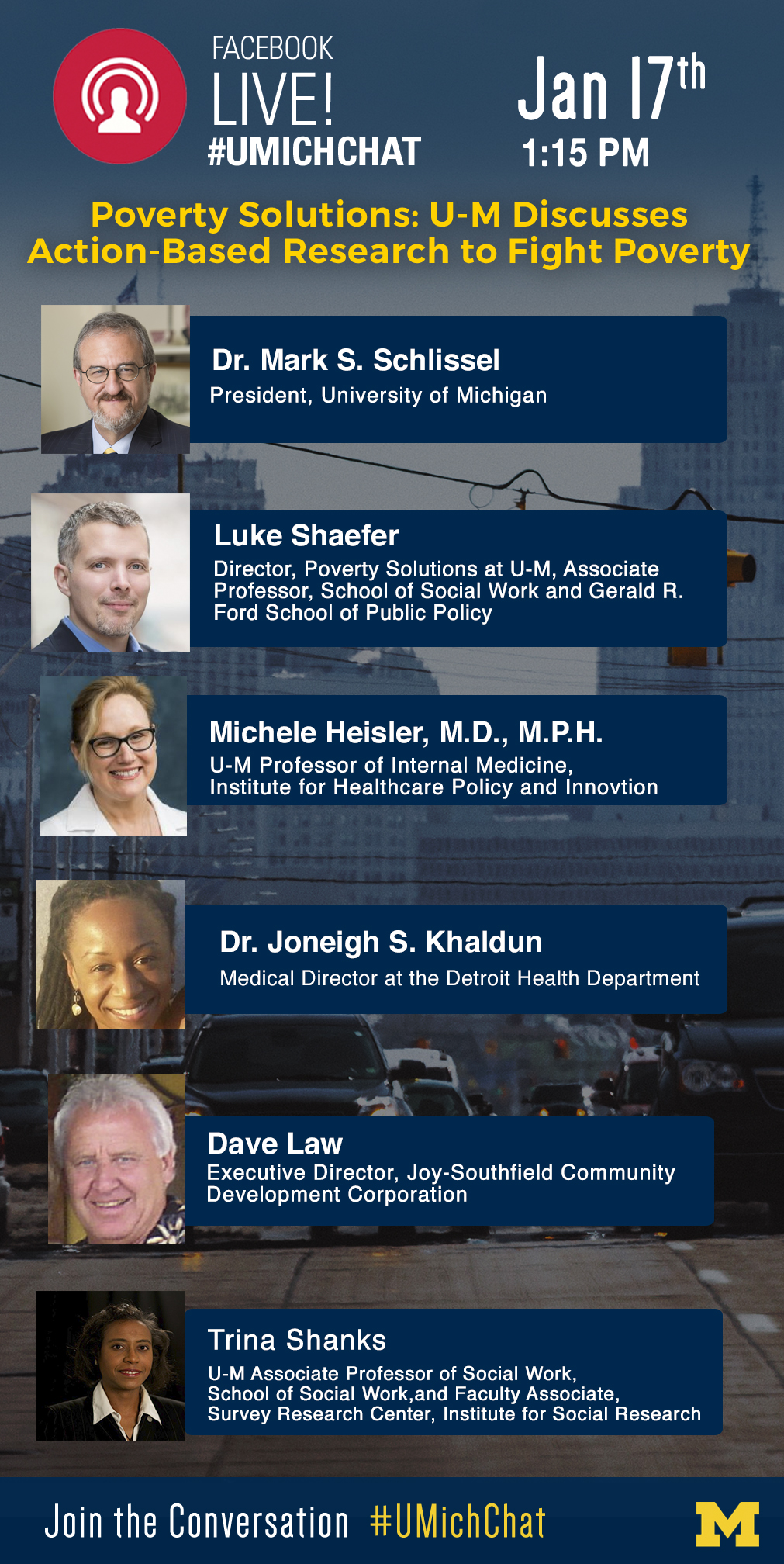 Over the course of the half hour, our panelists discussed a wide variety of topics surrounding poverty solutions, including programs that train community health workers to reach out to families who have difficulty accessing healthcare, bringing health services into the city, creating a summer jobs program for teenagers in low-income areas, and how the university is approaching this initiative from an academic context.

This was a highly anticipated #UMichChat, thanks to cross-departmental promotion from UMSocial, the U-M schools of Public Health and Social Work, Michigan Medicie, and the U-M Institute of Healthcare Policy and Innovation. The chat was also highlighted in the University Record and featured in an article by the Associated Press that was subsequently picked up by various media outlets including Crain’s Detroit Business, CBS Detroit , and The Washington Times. Michigan Creative—U-M’s internal ad agency—and Poverty Solutions collaborated to create a promotional/teaser video. As a result of that marketing campaign, thousands of people from across the country tuned in. The live chat received more than 17,000 video views and 358 reactions and comments. During the half-hour, the video was shared 40+ times, effectively reaching more than 200,000 people by the end of the livestream.

Additionally, the teaser video reached an estimated audience of 70,000 on Facebook, with 10,000 views of the original post and 48 shares.

After the chat, the Detroit News, MLive, the  Michigan Daily, and dozens of other media outlets continued to circulate the story.  As the Poverty Solutions Initiative continues to leverage both UMSocial and the social media presence of their partners to amplify their message, awareness about this critical initiative will only increase with time.

For more information about Poverty Solutions and it’s its partner programs, visit: