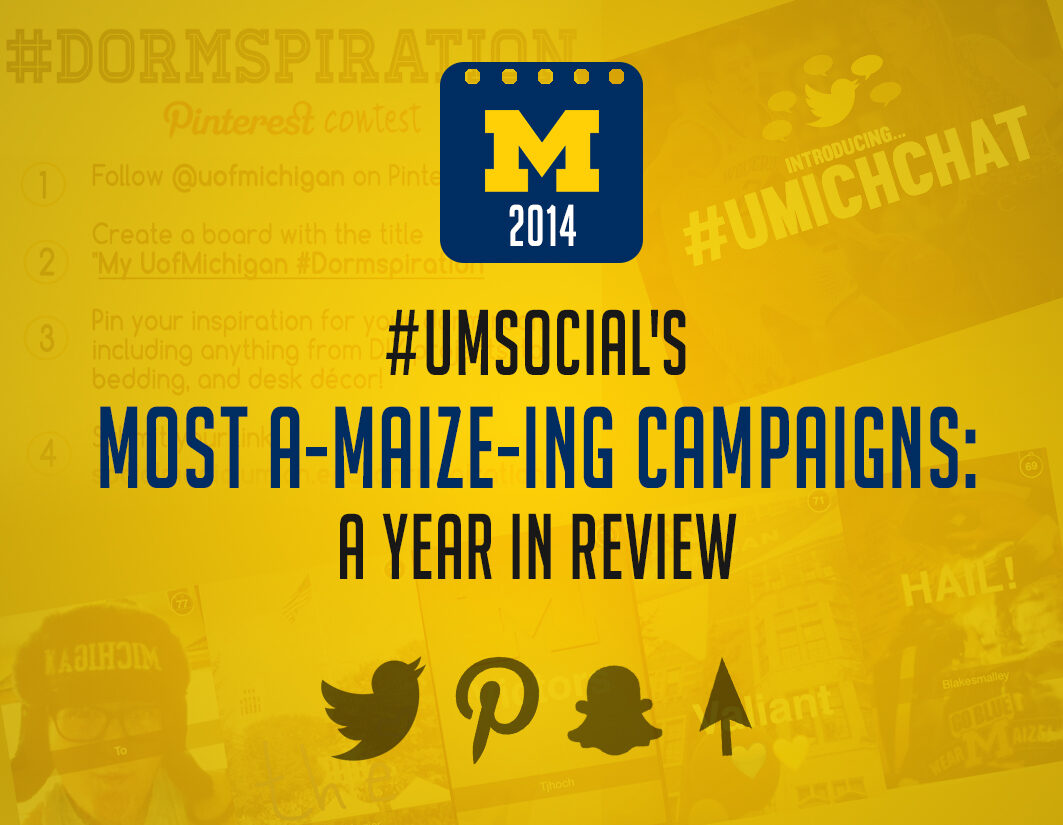 With the year coming to a close, we thought it was the perfect time to reflect on all that #UMSocial has accomplished. 2014 brought many new and exciting ways to interact with our beloved Wolverines. From introducing our UofMichigan Snapchat account in March to our inaugural #UMichChat in November, there was never a dull moment here at #UMSocial. However, like every year, there were several campaigns that really made a difference. Here is a recap of our favorite 2014 campaigns:

1. “Hail to the Victors” Snapchat Campaign

The UofMichigan Snapchat was launched on February 26th. As a new platform, “Snap” to the Victors was an interactive way for us continue to grow our followers. Our 5 hour campaign yielded over 150 submissions and over 1000 views of each snap. Seeing so many spirited Wolverines – this campaign quickly became my favorite. Now, our Snapchat stories receive over 2,000 views. The “Hail to the Victors” campaign helped make this possible!

As the summer came to a close, personalizing a dorm room became a priority for many freshman. #Dormspiration was a great way for our followers to be rewarded for their creativity. The chevron block M, the block M pillow, and the Michigan corkboard were three DIY projects for which we created step-by-step instructions. Our lucky followers were given the opportunity to make these awesome Michigan-themed projects and also create their own Pinterest board with ideas for decorating a dorm room. UofMichigan is number 2 nationwide on Pinterest. This campaign helped us to get closer to taking over that number one spot. With free-flowing creativity and the chance to become number one on a platform, how could this campaign not be one of my favorites? Check out our @UofMichigan #Dormspiration board here: myumi.ch/J2QPL

#UMichChat is an ongoing campaign that aims to engage our Twitter followers while reaching out to both academic and athletic leaders on campus. With our inaugural campaign on November 7th, the first Friday of every month will be dedicated to hosting a #UMichChat. So far we have had guests Spike Albrecht, men’s point guard, Kim Barnes Arico, women’s head coach, Gregory Anderson, editorial director at Yahoo, Martha Jones, professor of history, Afro-American and African studies, and law; and Jennifer Calfas, 2015 Editor-in-Chief of The Michigan Daily. The first two #UMichChat’s have been a complete success averaging 400 uses each of the hashtag. To catch a recap of these chats check out these links: myumi.ch/L4mXJ  and myumi.ch/aKEbJ

Although not all ideas can turn into campaigns, here are some honorable mentions that #UMSocial accomplished in 2014.

In February, #UMSocial launched it’s very own website: www.socialmedia.umich.edu. On this website we feature guest posts and monthly reporting among other engaging Michigan content. It’s your all-in-one guide to anything #UMSocial. The website receives over 6,000 views per month and has accumulated 24,993 unique visitors so make sure to check it out now before you miss anything new!  To follow our latest work you can view our November monthly recap by following this link: myumi.ch/65j8a

With over 4,000 followers we like to think about the introduction of President Mark Schlissel’s Twitter account as a success! This is the first-ever Twitter account for an incoming UMich president. Thanks to social media, this presidential transition fostered the opportunity to engage with the wider community and student population. Schlissel’s first tweet was well-received with 56 retweets and 139 favorites. Many schools within U of M welcomed the new Twitter handle by incorporating @drmarkschlissel in their tweets. A widely used hashtag, #UMPres14, circulated the Internet further engaging Schlissel’s Twitter following. Make sure to follow @drmarkschlissel on Twitter for a chance to engage with our 14th president!

2014 was a great year for #UMSocial. While we are in the process of developing new campaigns as the central uofmichigan account, we love to hear from our fellow Wolverines. Have any ideas you want to see in action? Contact us at umsocial@umich.edu. We are excited to see what 2015 brings. Get ready to experience our most innovative and interactive campaigns yet!