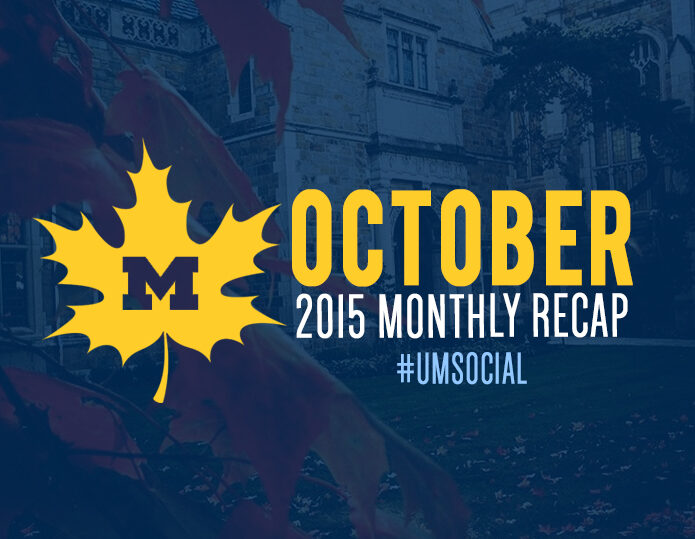 November is upon us and it’s certainly hard to believe that 2015 is coming to a close. It’s time to once again reflect on the successes from this past month, in order to evaluate how we can best implement new campaigns and increase engagement and visibility in the future. Follow along for October’s highlights:

We had the opportunity to host not one but two #UMichChat conversations this month. On October 2, we partnered with the School of Kinesiology to host a discussion about their revolutionary Intraoperative Neuromonitoring (IONM) Program. The chat generated over 5 million impressions and had an estimated social reach of 160,729 people. Another indicator of success:, after the chat, ‘IONM’ became a trending topic in the Detroit area.

One week later, we facilitated an exclusive #myhoMecoming chat featuring the enormously popular Chicago-based musical theatre troupe Team Starkid, who were in Ann Arbor for a reunion concert. The group gained prominence on YouTube with A Very Potter Musical—a song-filled parody of Harry Potter produced by U-M’s Basement Arts student group. The members of Team Starkid have all enjoyed successful theatrical careers, especially Darren Criss, who co-founded the troupe at U-M in 2009. (Criss starred in the original production and continued with it to Broadway, but he’s probably best known for his role on the TV series Glee.) The conversation resulted in extensive follower engagement, generating more than 3 million impressions and reaching a total audience of 692,739. Additionally, the chat helped our hashtag #myhoMecoming trend regionally.

With 75,000 followers, our Instagram channel flourished this month, as U-M community members shared and tagged their posts with #myhoMecoming. As an incentive for participation, we partnered with Athletics to feature posts with the hashtag on the Big House’s big screen during the Northwestern game. This strategy was certainly effective, generating more than 800 photo submissions in only three days.

Also this month, we collaborated with several university departments to facilitate several week-long takeovers of our Instagram account: a video series in conjunction with the Career Center’s 2015 Fall Career Expo; a chronicle of the experiences of the Solar Car team as they traveled to the 2015 Bridgestone World Solar Challenge in South Australia; and a conversation with the UMHS Pancreatic Cancer Center staff, who shared insights about their research and promoted their #Pan campaign. We used these posts to drive traffic to the departments’ individual websites, promote their events, and offer diverse perspectives from various areas of campus.

We leveraged our Wolverines of Ann Arbor Facebook feature to advertise an alternative tailgate co-hosted by Beta Theta Pi fraternity and SAPAC. These organizations teamed up to produce an alcohol-free tailgate complete with food, drinks, and activities for students to enjoy before the Michigan-Michigan State game. We profiled a member of the fraternity who shared his perspective about social responsibility and alcohol safety.

We galvanized #myhoMecoming spirit on Facebook by posting #tbt images of past homecoming traditions. We also created an album of our favorite photos and featured them as ‘photos of the week’ on the site. Michigan alumni have a deep emotional bond with their alma mater, and that was evidenced by the many commenters who submitted their own homecoming memories even when they weren’t asked to.

We used Snapchat to keep our community informed, covering various events and posting stories throughout the weekend. We followed along with the Michigan Marching Band and Cheer Team as they prepared to take the field for the Northwestern game. Our coverage also included a live-action shot of the world’s largest human roller coaster, which took place in our very own student section. This feat was orchestrated by the Michigan Cheer Team’s Michael Funkhouser, who recruited participants via the @umichstudents Twitter account. In just four days, Funkhouser and the team were able to mobilize the student section to participate and successfully break the world record.

We have also begun collaborating with various U-M departments to create a series that highlights academic programs and resources. These stories will provide useful tips for students to help them optimize their academic potential and learn about career opportunities; the series will also showcase research initiatives. Our first story highlighted LSA’s new Law, Justice, and Social Change minor; we released it the same day as a lecture given by Piper Kerman. Kerman the author of the personal memoir Orange is the New Black that inspired the popular Netflix series of the same name. Her lecture, which synthesized themes from the domains of women’s study, law, public policy, and sociology, explored the diverse perspectives on prison reform and education. Our Snapchat story helped promote her lecture and thematically connect it to an academic program. By showcasing real-life applications of various academic programs, these Snapchat collaborations will expose students to areas of study they may have not previously considered. These collaborations also serve as useful promotional tools for academically-focused events.

Safety is always a primary concern on campus, and U-M has worked hard to educate students about alcohol use and abuse, and appropriate risk management strategies. To stress the importance of Alcohol Awarness we created a video PSA featuring Student Life vice president Royster Harper, CSG president Cooper Charlton, U-M president Mark Schlissel, and Coach Harbaugh himself. The PSA provided an alternative platform to traditional ‘alcohol awareness’ communication channels, allowing us to get our message out to an audience that skewed heavily to students. This Snapchat story received more than 5,000 views. We further extended its reach by uploading it to our Youtube Channel and sharing it on Facebook.