Conversations for Change: Pride at HoMe 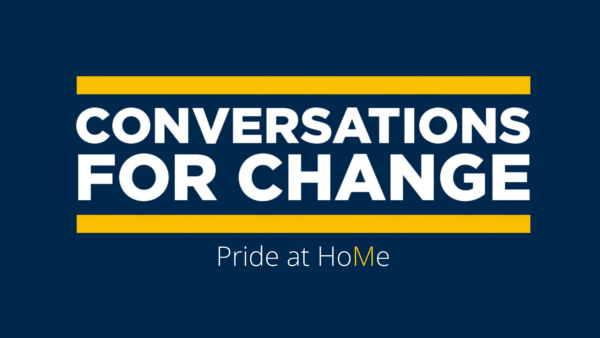 “Pride” has never been a word or idea that I embodied.  I was always a timid, low-flying guy that felt uncomfortable and ashamed of who he was.  I was high-achieving academically because it was the one area where I could focus my attention to drown out the noise of self-doubt and self-deprecation and even see a potential to be proud of myself.  I worked tumultuously, night after night, exam after exam, until I became valedictorian of my high school.  Yet, I was still plagued by an air of doubt and shame.  I could not explain it, and still cannot, but I felt like I was lying to the world and did not deserve my status.

Throughout my high school career, I began to understand myself better as a person.  I knew what I enjoyed doing, I realized how I learned best, I discovered my passions, but I stumbled upon a piece of myself that I had neglected for 16 years.  No matter how I approached it, I could not pull myself to accept that I found men attractive.  I found every excuse and rationale to avoid the acceptance of my truth.  This story, a common theme amongst LGBTQ+ individuals, has been expressed time and time again.  But the true weight of this reality is nearly impossible to convey for those who have not experienced it.  The thoughts of deafening self-hatred drown out everything.  To put it bluntly, I absolutely despised myself for my identity.  I had to go through the motions of everyday life with a pang of suicidality and severe hatred for my very being, which ultimately made life insufferable.

On top of this overwhelming pain that I carried, I was lost.  I had no clue who I truly was because I simply could not accept who I was.  I had convinced myself for so long that I was someone I was not, that when I could no longer ignore the truth, I had no clue what to believe.  I thought I was attracted to women, but only ever found myself pining after other guys my age.  But the label “gay” felt wrong.  It didn’t fit who I was but appeared to have been my only option.  So I remained quiet, suffering and ashamed of my identity that I could not even straighten out.  Each day I clung onto life as if death were dragging me away.  I was petrified, not just of myself and who I was, but of anyone finding out.  It was evident that being queer was not a matter of choice, because simply no one would have chosen this for themselves.  I knew people that were a part of the LGBTQ+ community, and lovingly accepted them as anyone else I loved, but could not help but feel as though I was disgusting.

It was not until my Senior year of high school when I forced myself to the revelation that I was bisexual.  On one hand, I felt relief that I had found an identity that fit who I was, but I continued to feel insurmountable pain, shame, and disgust.  A total of four friends– to whom I was closer than anyone in my family– knew my secret and lovingly welcomed the new me.  But I could not.  I was battling and abusing myself for being me.

When I first stepped foot onto the University of Michigan’s campus, I wanted to start over.  I wanted to live everyday as myself, and not some shell of a person wearing a different mask.  But I could never pull myself to see who I truly was, much less other people.  The few times I did, I was met with striking microaggressions that reaffirmed how I felt about myself.  I was outed to other people, given nasty remarks about the existence of bisexuality, and even had slurs flung at me.  After years of suffering to accept who I was, I now had to decide whether it would even be safe for me to embrace it or not.

After being accepted and loved by seemingly more and more people on campus, I began to accept and love myself again.  I could finally be honest with myself and others and not crave death.  Arriving at this final destination was never something I had expected for myself, but the journey itself was humbling, to say the least.  And this very journey is what Pride is about.  Pride Month for members of the LGBTQ+ community is not just about embracing our true selves, but about acknowledging the hell we went through just to understand ourselves, much less accept and not hate who we are.  Being proud of who we are is not a form of attention, either; Pride is a call of community that acknowledges our struggles, both personal and historical, and expresses to those who are still suffering that there is light at the end of the tunnel.