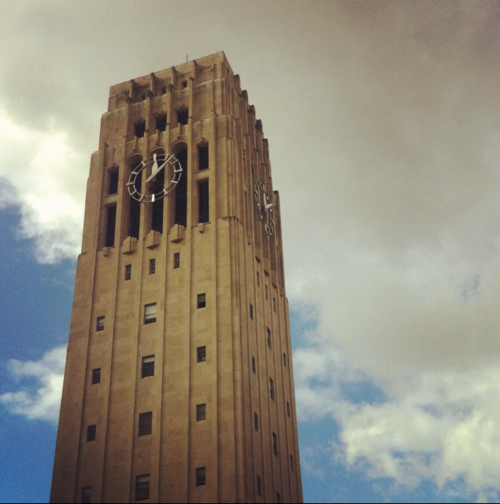 When we saw LSA’s video Uncommon Campus, we were eager to do a little discovery of our own around the UMich campus. Our first stop is arguably one of the most recognizable landmarks in Ann Arbor: The Burton Memorial Tower and Carillon.

The tower itself was built and dedicated in 1936 to University President Marion Leroy Burton (1920-1925). It was designed by Albert Kahn, who also designed the Clements Library, Angell Hall, and Hill Auditorium. The grand Carillon, which is the third heaviest in the world, was a gift to the university from Charles Baird, a former University of Michigan athletic director. Some may think it’s strange that Baird chose such an expensive gift that couldn’t be seen, but every time the Carillon rings, we can remember Charles Baird in the gift that is heard, and not seen! Comprised of 53 bells; the largest bell, which strikes the hour, weighs 12 tons and the smallest bell weighs 21 pounds.

Fun Fact: It was once said that the only way to reverse the curse of stepping on the Block M in the diag was to run from the M to the Pumas while the clock is striking midnight; However, since the original IBM clock system was replaced in the 1980s with a computer, the clock no longer strikes at all at midnight! (There is serious discussion of re-introducing the old tradition, so you may be in luck if you’ve stepped on it) From 12-12:30 every day classes are in session, you will hear a unique recital from the Carillonnuer, Steven Ball, or one of his 20 students from the Music Theater & Dance class “Carillon” (which any UMich student is eligible to take!). There is a common misconception that these songs are automated, but Ball assured us there is no way this is possible. See him in action:

You can see the recitals for yourself from the observation deck (Up 8 floors, then 2 flights of stairs) any day from 12-12:45, while enjoying the views of Ann Arbor from 120 feet above campus. Steven generously offered to take us through the practice spaces and his office inside the tower, while telling us more of the history, and possible plans to bring the Carillon online. We’re talking about song requests!

Do you want to here the Carillon play your favorite song? Tweet us @umich using the hashtag #CarillonRequest, and we’ll try to get the ball rolling! We’re rooting for Call Me Maybe…