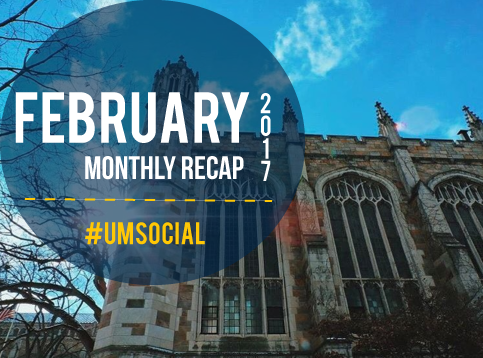 February may be the shortest month of the year, but that doesn’t mean there’s any less activity on campus—or at #UMSocial. Follow along for the highlights of the month:

On February 16, UMSocial facilitated a Facebook Live #UMichChat panel that addressed the topic of digital dating abuse. This chat was moderated by Quyen Epstein Ngo, a research assistant professor in U-M’s Department of Emergency Medicine. Epstien Ngo was joined by her two undergraduate research assistances, Nyla and Devin. Over the course of the chat, more than 14,000 people tuned in to this illuminating conversation on a controversial topic. 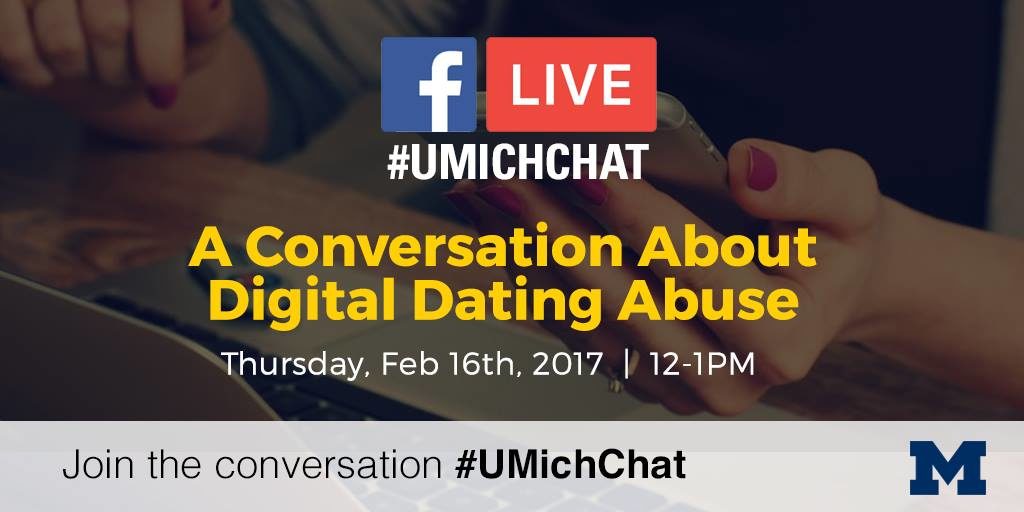 You can find a full recap of the chat here, or watch the whole conversation on our Facebook Page.

This month, we produced our second Facebook Canvas post to promote a long-form story from Michigan Engineering about an alumna who quit her six-figure job and started a bean-to-bar chocolate factor in Haiti. Canvas, a new multimedia storytelling feature from Facebook, allows brands to build immersive stories with any combination of images, videos, and call-to-action buttons. Currently, this feature is only available for mobile; however, we’re eager to continue to explore its capabilities and integrate more Canvas features into our strategy.

February marked our first time using Twitter Live, which allows users to create video directly from the social media platform, executed through Periscope’s livestreaming technology. We chose to test this new feature by livestreaming this year’s TedXUofM conference. We’ve attended TedXUofM in the past and utilized a variety of channels and strategies to provide dynamic coverage, among them: live tweeting, Snapchat stories, and real-time interviews with speakers. This year, in addition to those approaches, we decided to livestream some of the talks and performances on Twitter. The results were encouraging: more than 200 people joined in within the first three seconds on the broadcast—a record initial engagement metric for any of our livestreamed content. We’re looking forward to using Twitter Live for future compelling event coverage in the coming months.

In addition to our Facebook Live Chat this month, we also hosted a conversation with Wolverine Wellness and Body Peace Corps as part of National Eating Disorders Awareness Week, seven days of activism and education spearheaded by the National Eating Disorders Association. This chat aimed to bring added awareness to the problem of eating disorders on college campuses, and the work being done to address the issue. 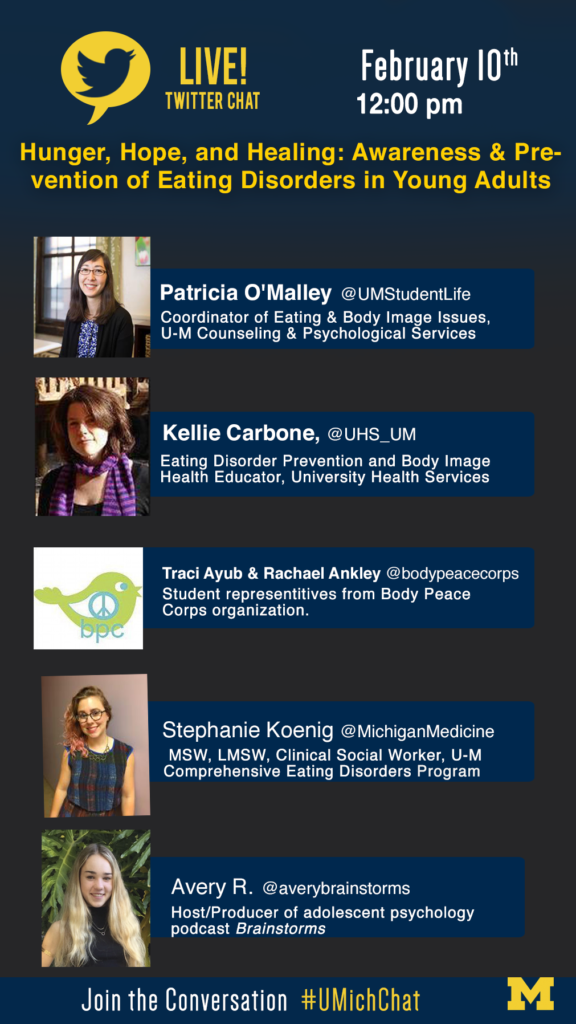 This chat generated significant engagement due to participation by and cross-promotion with numerous university departments. Michigan Medicine, the Office of Student Life, and University Health Service, among others, publicized the chat and urged their followers to tune in. We also heard from representatives of the National Eating Disorders Association, who chimed in from the official @NEDAStaff Twitter handle, which effectively spread our conversation to their audience of over 30K Twitter users.

We often leverage holidays as opportunities to experiment with creative forms of branded content. Last Valentine’s Day, we released our first Instagram gif, which generated more than 20,000 video views. This year, we continued that trend by releasing another branded gif, which featured a couple kissing under U-M’s famous Engineering Arch. In conjunction with this post, we also released three custom Valentine’s cards on Twitter, featuring campus landmarks paired with Valentine’s Day greetings. These combined efforts generated more than 120K impressions and 4.6K engagements. The Instagram post alone reached an estimated social audience of 35.3K.

On February 16, the Ford School of Public Policy hosted a panel discussion about sexual assault on campus, which featured many different perspectives. U-M Social curated an Instagram story, interviewing panelists and linking to the YouTube Live Stream of the discussion. The last frame of the story had 11.2K views, and more than 300 people swiped up to view the stream.

Our top-performing Instagram post of the month, an adorable shot of triplet “little victors” decked out in maize and blue, was originally posted by the C.S. Mott Children’s Hospital on Facebook at the end of January. We reposted the photo on February 1; it went on to receive more than 9,000 likes and nearly 200 comments. 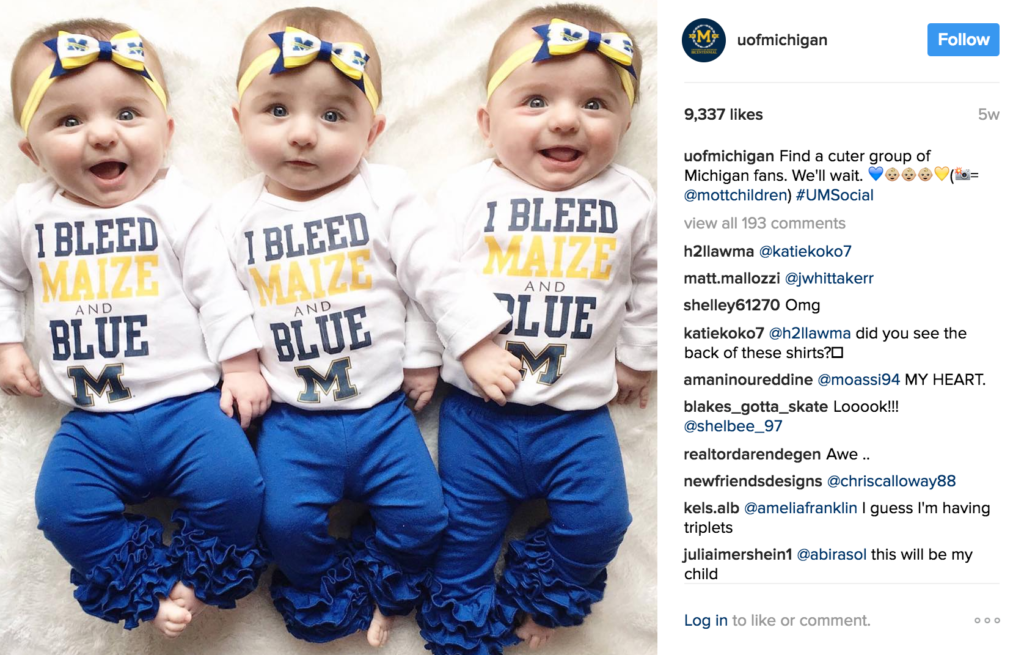 Ever since Snap Inc. released Spectacles this past fall, #UMSocial has been eager to get a pair and integrate them into our strategy. On February 11, we got our chance when Snap. Inc’s Vending Bot arrived in Ann Arbor. We bought two pairs of these camera-equipped glasses; one for our own personal use, and one to lend out to on-campus units.

We created a ‘Spectacles How-To’ Snapchat story later in the week to show our Snapchat followers how to use the glasses to create content, and give examples of moments they could capture in new ways with Spectacles. At its peak, the story had more than 5.2K views.

If you’d like more insight on how and why #UMSocial will incorporate Spectacles into our broader social strategy, check out our blogpost on the subject.

We’ve continued our ongoing bicentennial content campaign by publishing a daily bicentennial tweet. Kim Clarke, director of the U-M Bicentennial Communications, has been providing us with five pieces of content each week that showcase key moments in Michigan’s history. These tweets have been engaging our audiences, and consistently generating high impressions. The top-performing bicentennial tweet of the month, highlighting the achievements of Willie Hobbs Moore, received more than 24K impressions and 400 engagements.

During his time in Houston, Peter documented his experiences using a combination of Instagram posts, Instagram stories, Snapchat stories, and the @UMichStudents Twitter account to craft an informative and entertaining narrative. Via these channels, he was able to let our audience experience some truly incredible things: live feeds into the International Space Station, maps tracking the real-time location of multiple satellites, mockups of ISS and Orion, and a tour of a 6-million-gallon pool that NASA astronauts use for zero-gravity training.

Upon returning back in Ann Arbor, Peter summarized his experience in a blogpost. Check it out to learn more!

Thanks for following along! Be sure to check back next month for more reflections and insights. As always, #StaySocial and #GoBlue!